Five days ago, I was contacted via social media by someone who told me she has a family connection to my property. It turns out her late father owned this property for about 35 years, right up until the date of his death in 2010.

I still have no idea how she came to be in touch with me. I'm guessing she must have done a Google search on the names of members of her family and hit upon my blog, which mentions the names of former owners.  From there, it's a hop, skip and jump to social media, and thence to me.

I was glad to hear from her, because I'm inquisitive by nature, and very curious about this property.

She searched through her old photographs and came up with several photos that were taken on the property. Some were particularly fascinating.  First, her Dad looked exactly as I imagined he would look.

Two photos were of Bleak House.  The first she dates at approximately 1980.  Can you see it there, on the far side of Pond One?  This is before the bump-out was added on.  Also absent is the screamed-in porch, though close inspection shows pillars in front of the door, so the entrance must have been partly sheltered. 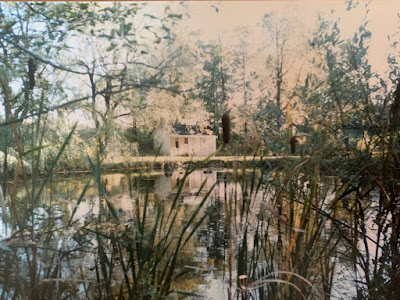 The second photo dates from 1984.  It shows the extension and the full-size screened in porch. 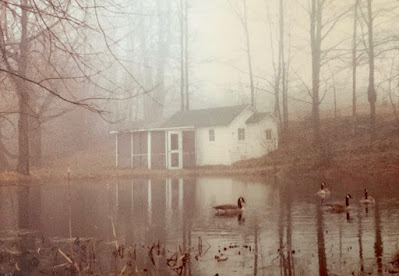 The third photo that really caught my attention was one of the big house on the hill.  I would not have recognized it. 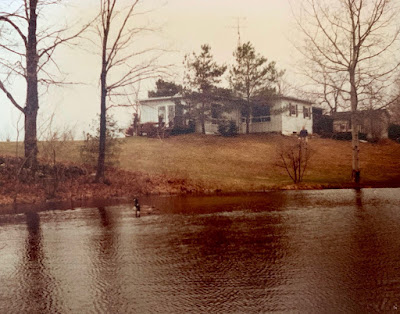 You see what looks like a separate little building on the right side of the photo?  That is no longer there.  In 2005 a very striking two-storey addition was built onto the house. Like the whitish-looking house you see in the photo above, the board-and-batten exterior is now stained dove grey, but the very tall second storey has a sharply angled roof, huge windows and tons of skylights, making it both modern and rustic at the same time.

And yet from the street, you'd scarcely notice it behind the tall Brandon Cedars that line the west wall.

As for Bleak House, I now know what I'm planning to do: I'll take it right back to its original sweet glory, with the pillars out front narrowly sheltering the entrance. 1980 was a good year.

I'm really grateful to SRW, the family member who contacted me.  I look forward to speaking with her at length in the near future.