During his illness, Ivaan agreed enthusiastically to any public speaking opportunity, accepted every invitation to attend professional conferences on some aspect of his medical condition, and volunteered as a subject for any research project under way.  To say the least, he was not a passive patient.

One year, when he still had enough clear speech left to make himself understood, but not quite enough memory to deliver a speech unaided, he was asked to speak at an event to raise funds for the expansion of Toronto Rehabilitation Institute.  I helped him write a speech detailing how important Toronto Rehab had been in his recovery from the strokes that affected him so profoundly, but he couldn't see clearly enough to read written text.
So we devised a plan where I'd sit in the front row and give him some key words from each section of his presentation, and he would expand on
what I'd given him.  When he paused, I'd cue him with some more key words from the next section, and off he'd go. It was a terrific speech, and was well received.

On another occasion, his Speech Language Pathologist asked him to attend a conference with her, to demonstrate a technique the two of them  had developed to aid stroke patients in swallowing without choking.  This technique was developed by the traditional practice of Jews at a Passover Seder, who would have a cushion at their chair and recline to the left as they were eating, in slight imitation of earlier generations reclining in comfort on soft cushions on the floor during the Passover meal.  I'd mentioned to Ivaan that they always reclined to the left.  He found that by tilting his head to the left and tucking his chin in, he could swallow with less risk of choking. He mentioned this to his Speech Language Pathologist, who asked him to demonstrate the "Kotulsky Tuck" to a conference of her fellow SLPs.

Many of the research experiments in which he took part involved electrical stimulation of the muscles of his right arm, which was his paralyzed side. Ivaan was so certain that with enough electrical current going through his arm he could overcome paralysis that when the researcher's back was turned, Ivaan would adjust the intensity of the electrical stimulation (well, he referred to it as torture) to its maximum level.  He also bought an electrical muscle stimulation machine for use at home, and tried to get me to administer electrical shocks to him. When I demurred, he had the researchers draw the ideal location of the electrodes on his arm with permanent marker, so I'd know where to attach them for maximum effect. I usually tried to get out of aiding him with his unscientific experiments. He became such a fixture at Lyndhurst Hospital, where research was conducted, that he regularly dined with the professional staff at lunchtime in the cafeteria.  He had become just part of the crew.

Sometimes he'd volunteer me as a co-participant in research projects. It was very interesting when they'd ask him a series of questions about something, and then ask me the same questions, to find out how I predicted he would have answered. It's surprising how much I learned about him from these research projects.

After Ivaan's death, I decided to continue as a research subject in the Neurology Research Department at Toronto Western Hospital, as a way of expressing my appreciation for the excellent care he'd received there since his first stroke in 2000.  Eight years later, I'm still a "lab rat", mostly acting as what's called a Healthy Control in studies related to Parkinson's Disease.  Over the years, I've seen PhD students and Post Doctoral researchers cycle through the research lab, marry, have children, continue their careers and participate in exciting new research projects.  I've learned that I am surprisingly good at tasks involving memory, that I share with Ivaan a real pleasure from undergoing MRIs, and I have pictures of my brain on my computer at home. It's quite a nice brain, actually.  One of the researchers told me it was a dense brain, and I admit I was a bit offended until I realized a densely packed brain is a good thing to have, and she wasn't saying I was an imbecile.

All this to say that if future generations are ever leafing through my yearly appointment calendars and they see the words "Lab Rat" written, it's code for the fact that I spent that morning at Toronto Western Hospital with a bunch of nice people I've come to know well, and that I undoubtedly went to my grave with coloured permanent marker on my scalp, drawn at the places where electrical shocks were administered.

Here is an image of my brain, in case you want to admire how dense it is. 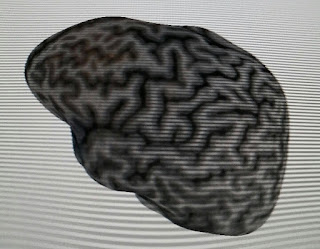 30 PIECES OF SILVER: THE SECOND DRAFT

I've always heard writing a book is hard work, and if it isn't hard work, then it's probably not much of a book either. Perhaps my job in writing 30 Pieces of Silver was easier because of this blog, as I was able to work out the kinks of each chapter via blog posts, but honestly, it has not been hard to write the book at all.

Further, the book is not a work of fiction, so most of what I've been doing is selecting representative pieces of Ivaan's work and telling the story of those pieces from my perspective.  Oh, yes, and then brutally slashing my narrative to fit the chosen dimensions of the book.

Another important decision was to scrap my photographs.  It was like performing battlefield surgery, because I had taken photos to illustrate what I was writing about.  The result was a series of photos that weren't horrible individually, but there was no nexus, nothing to link them together and give them a cohesive appearance.

So I focused on what I do best  - providing a narrative for each piece that told a story and sounded like me speaking to the reader - and left the photography to the experts.  I also got some professional advice (and I am not good at accepting advice) about the layout and dimensions of the finished book.

Two more photos remain to be finished up and then I think we'll have a final draft. But the front cover is going to look something like this.  It's a very exciting time for me.

THE ROAD TO DAMASCUS


In 2008, we had a visit from our friend Donald Doiron, who is a sculptor and knifemaker in Messines, Quebec. Ivaan made beautiful knife handles and Donald made beautiful knife blades, so it was no surprise that they had a lot in common. Even though Ivaan was within a few months of the end of his life, he enjoyed socializing with his fellow artist and hearing about what Donald was up to.

One of Donald's specialties was working in Damascus steel.  If you've never seen Damascus steel before, it's the puff pastry of metalsmithing: two or more kinds of steel layered against each other, heated and hammered, folded, heated, hammered and refolded so you can see the pattern made by each of the types of steel.  It takes a lot of skill to make Damascus steel.  Donald's knife blades are exquisite.

About a month after Donald's visit, a heavy package arrived in the mail, addressed to Ivaan.  We tore off the brown paper wrapping.  Inside was a box for a computer printer.  We set the box aside, wondering why Donald was sending us a printer.  I offered to phone Donald that evening when he got in from work and ask him about it.

In moving the box, however, I noted that it seemed unusually heavy for a printer, so I opened one corner of it, pulled out the packaging, and was amazed to discover an incredibly beautiful Damascus steel sculpture inside. We were both stunned into silence, watching the light hitting the sculpture and marvelling at the design and artistry.

It was mounted on a whitish, rough-hewn stone base, and if I were to describe it, it was like the curved tail of a fish above the surface of the ocean. On one side was a flourish of different kinds of steel, as if the fish had shaken a spray of water from its tail into the  air.

This is no small, lightweight sculpture.  It's tall and heavy and has an extraordinary quality that is typical of Ivaan's work, in that it is beautiful from every vantage point.  Ever since 2008, it has had pride of place in our home.

These days, it is usually displayed in the window of Atelier Ivaan, where the light is best.  It attracts a lot of attention, particularly from passersby who are fascinated with metalsmithing.  Every time I see it, Donald's sculpture makes me catch my breath and say a silent thank you to him for his generosity.  He must have realized that this would be the last piece of art Ivaan would acquire in his lifetime, and he wanted to make it magnificent.