One of the best features of this magnificent property I'm responsible for (because I don't feel I own it, despite having paid for it; I have become its steward - a responsibility I take very seriously) is that there are three ponds.  The first is quite small, perhaps 50 feet across. I still call it Pond One, because I haven't come up with a better name for it yet.  The second pond, Pond Two, is about four times the size, and right now it is covered in lily pads but the water is surprisingly clear.

Ponds One and Two are connected by an underwater pipe made of corrugated metal, so that theoretically there is some flow of water.  Pond Three is the largest of all.  It is connected to Pond Two by a narrows.  If I am alone in the boat and it has been raining heavily, I can row through the narrows with some effort.  If I have a passenger in the boat, I climb out at the narrows, into the pond, (horrifying my passenger) and slide the boat through to Pond Three.

Pond Three has a name.  I've called it Group of Seven Pond, because it looks exactly like a painting by one of the Group of Seven.  My nephew, Ivor, who has a dry sense of humour, cautions me to be careful when I'm sailing on Pond Three, saying "remember what happened to Tom Thomson".

Pond One flooded its banks this spring, due to the very heavy rains, so it is in my estimation about 30% bigger than it was last year.  The screened-in porch of the boathouse next to it is also flooded, though the interior of the boathouse, which is slightly elevated, is reasonably dry.  But unless we have a long, hot, dry summer, I doubt Pond One is going to shrink to its regular size.

Now that I'm responsible for some beautiful land, I am doing my utmost to keep it, and the ponds, in good condition.  This means encouraging the flow of water from Pond One into Pond Two, and from there into  Group of Seven Pond.  I've observed that any branches which have fallen into the ponds impede the flow of water generally, but especially so at the narrows between the ponds.  Every time I remove a branch, there's a great deal of bubbling from the bottom of the pond and then a little rush of current in the right direction, so I know I'm doing the right thing.

If you want to feel incredibly strong, just pick up a gigantic log floating in water.  It's easy, because the water is supporting the part of the log that you're not lifting.  Thus, I've been able to pull out tree trunks nearly a foot in diameter and 12 feet long.  I pull them onto the shore as far as I'm able, let them dry out for a few days, and saw them up for the fire pit.  I will never run out of firewood if I live to be two hundred.

All this coaxing logs out of ponds can't be done from shore, so mostly I'm out in my trusty boat, the Good Ship Louise,  using a loose paddle to nudge the bigger branches toward the shore so they're easy to haul out.  Sometimes I'll move a large piece of tree trunk under the bridge leading to the island, intending to float it into  Group of Seven Pond, and find that the next day it has returned to the position it occupied before I moved it.  But as I remove more and more branches from the ponds, I can see the ponds are appearing healthier.  Progress is glacial, though, and I expect to be working on this for years.  Additionally, sometimes I'll see a branch fall off a tree while I'm out rearranging logs, so things are getting better and worse at the same time.

All of this reminds me of a Québecois song I love, entitled The Log Drivers' Waltz.  I often sing it to myself as I'm out on the Good Ship Louise, rearranging the flotsam on my ponds.  Here are some photos from Group of Seven Pond. 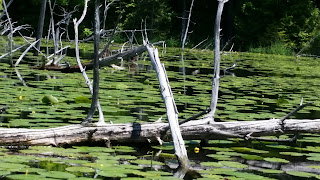 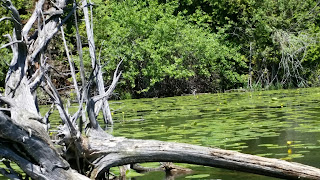 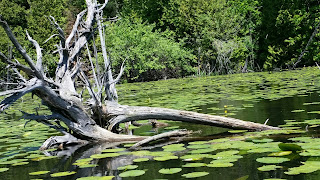