This is my sanctuary.

I love waking up at first light, hearing only the sound of birds chirping, and going to sleep when it gets dark, hearing the sound of peeper frogs and the occasional encounter between a coyote and a goose or two.  I often get irritated with Canada Geese, who leave cigar-shaped  reminders of previous dinners all over my lawn, so I'm no longer unnerved by evening coyote visits. Coyotes are like my own personal mafia; if I have a score to settle, coyotes have my back.  I know there will eventually be a day of reckoning, but it hasn't happened yet.

So yes, this is my sanctuary. I just didn't realize that it's also a turtle sanctuary.

Twice now, I've seen a large snapping turtle out where my driveway meets the road.  The first time was a Monday; it was  trying to lay its eggs on a steep hill beside my gate.  It didn't seem like a brilliant location, but who am I to judge? I took some photos and left it to mind its own business. 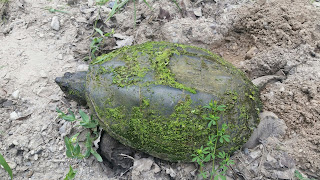 The second time,  the following Saturday, I received an early morning email from my neighbours to say a snapping turtle was laying her eggs smack in the middle of the entrance to my driveway.  I ran out the door.  It was the same turtle.  I recognized her by a rectangular indentation on her moss-covered shell.  You could have put your business cards in it. 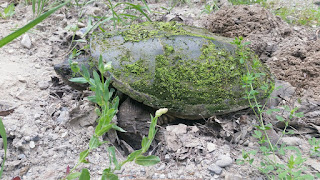 Once the eggs were laid and the turtle had left (because turtles' parenting skills are neglectful in the extreme), my neighbours put a wire crate over top of the eggs to protect them from predators.  A few days later, my nephew Angus and I built a proper screen to cover the nest, complete with an access door so the babies could escape as soon as they hatched. We're going to be looking at that screen for a long time. Snapping turtle eggs can take months to hatch.

Another snapping turtle appeared beside my vegetable garden a few days later. She seemed a bit younger, with less moss on her back. Coincidence?  I thought so. 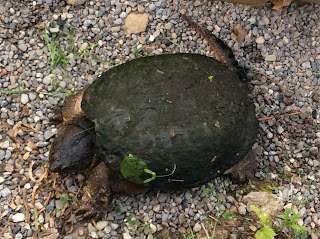 Yesterday morning, I went to check the swimming pool and found a very large snapping turtle in the shallow end, coming up for air.  I didn't even run for a camera.  I just got my largest net and, with some difficulty, fished it out.  It took off, as fast as it could, the minute it was on dry land.

With some trepidation, I went down to the pool this morning, and there was yesterday's snapping turtle, coming up for air in the shallow end again.
This time, I ran back for a camera.  When I returned, it had wedged itself between the ladder and the wall of the pool.  I took a photo, then fished it out with my net. 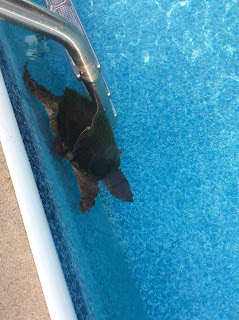 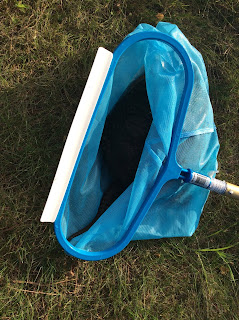 This time,  it just sat in the net, making no effort to leave.  Eventually, I carried it down to one of the ponds and tried to coax it out of the net. A word to the wise: snapping turtles do not appear to enjoy being coaxed. They don't seem to like much of anything, actually.  Its claws were tearing my nice new net and it was hissing up a storm.  Meanwhile I was getting bitten by mosquitoes by the dozen.

It took some doing to dislodge The Snapper from my net.  As soon as it was free, it made a beeline for the pond. Frankly,  I hope it stays there. And now, if you will excuse me, I have to go and add a extra dose of disinfectant to my swimming pool.  A friend has sent me a photo of a wire shark, which is apparently a scarecrow for turtles.  I want one for the pool.
Posted by Eya at 1:02 PM No comments: