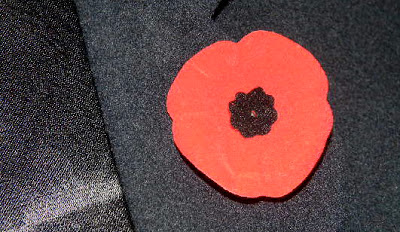 This is my poppy pinned to the left lapel of Ivaan's navy cashmere overcoat. At eleven o'clock on November 11th, I stood in silence in the doorway of Atelier Ivaan, wrapped in his overcoat.  Remembrance Day was important to Ivaan. His third stroke took place on Remembrance Day, 2005. (With his usual sense of occasion, Ivaan marked Ukrainian Christmas Eve and Hallowe'en with heart attacks, Valentine's Day, Remembrance Day and Pearl Harbour Day with strokes. )

Although he was born during World War Two, it was the First World War that really gripped Ivaan's imagination.  Speaking about the events of the Great War, and the tragic legacy of that war, Ivaan often brought listeners, including me, to tears.  In one single year, the entire graduating class of Eton College, all of whom had enlisted, died taking part in the war effort.

Ivaan attended as many Remembrance Day ceremonies as he could, though as his health deteriorated, it was harder and harder for him to sit in his wheelchair in the cold, at the cenotaph in front of Old City Hall.  One year in the early 1990s, we watched the ceremony from inside the lobby of Old City Hall, where I worked at the time. On this occasion, Ivaan met and photographed Poland's Solidarity leader, Lech Walesa, who was also in attendance.

One of the greatest tragedies of the Great War, as Ivaan told it, was the lasting legacy on future generations.  In Canada, virtually every young and middle aged male in reasonably good health went overseas to fight in the War.  Being exempt from enlisting, through poor physical or mental health, or because one was needed at home to work for the war effort, was a source of great shame for men and for their families.  Yet the casualties of the First World War were so high, and the conditions under which the men fought were so horrific that the few who returned home after the war were damaged beyond repair.  Loss of limbs, the effects of breathing mustard gas, loss of hearing, shell shock, and loss of mental stability were just some of the effects of the war on returning combatants.  But most were simply slaughtered, and in retrospect it is hard to reconcile the events at places like Passchendaele with the results, particularly for Canada.  Canadian men were used, plain and simply, as cannon fodder. They went overseas to fight for freedom from oppression and for justice, but there was none for them.  Once enlisted, there was no turning back.  Desertion meant death at the hands of one's own army.

The end of the War in 1918 left a much depleted inventory of men for young women to marry.  There were the men who were exempted, on grounds of poor mental or physical health, and there were the men who came back permanently damaged by their experiences.  This was the pool of men from among which one might find a spouse.  The result, as Ivaan calculated, was that it would take five generations to undo the effect of wiping out the cream of the Canadian and British male population.

Ivaan, whose physical health was so compromised by the circumstances of his birth in a Nazi slave labour camp, never forgot the sacrifices of the World War One veterans and of their families who suffered the ravages of the War.  Right until the end, Ivaan was there at the cenotaph with his camera, so those veterans would live on through his pictures.