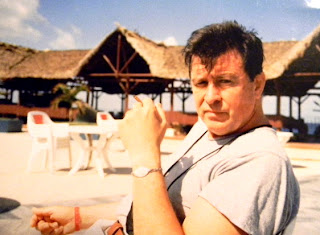 After the hurricane had died down, staying in the hotel was less than appealing.  There was broken glass everywhere, bats swooped through the lobby every evening,  eliciting screams from the hotel guests, and a large band of gypsies had taken up residence in the hotel.  We decided to make ourselves scarce.  We went down to the waterfront outside the hotel to look around and were promptly accosted by a man intent on robbing us.  It was only through Ivaan's quick thinking that we escaped.

We headed downtown along the Malecon and came across a large crowd standing on the breakwater looking out into the harbour.  The waves were still high, and a small fishing boat had capsized.  Two men and a young boy who had fallen overboard were flailing in the deep water.  They had apparently gone out to catch some fish, which are plentiful in the wake of a hurricane.  In the distance, a tiny rescue tug was chugging slowly towards them, but it was pretty clear it was not going to reach them in time.  It was horrifying.

We headed downtown.  On every corner, musicians were congregated on street corners singing and playing songs from Ry Cooder's Buena Vista Social Club.  On every street, children were running up to us asking for caramelas (candy) and luckily we had brought plenty from Toronto for just this purpose.

No trip to a strange city would be complete for Ivaan unless it included visits to every one of the second hand camera stores.  There were several such stores, all run by seedy-looking Russian expatriates.  Each of them promised that if Ivaan would just step into their back room, they would show him the rare treasures they had hidden back there.  Ivaan was desperate to see these cameras.  I was just as determined that we were going to leave, as things were beginning to feel very unsafe.

We had not been back at the hotel for long before the telephone rang and the front desk clerk told us we had a visitor who wanted to see us in the lobby.  We realized that the Russians had followed us back to the hotel.  Needless to say, we stayed in our room and didn't answer the door. 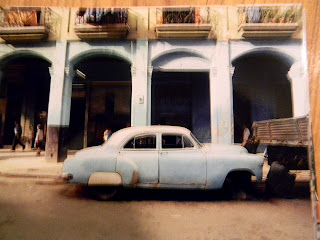 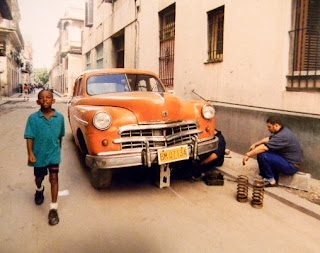 Havana was an incredible photo op.  The ornate, crumbling buildings, the 1950s American cars in pastel colours, the incredible ingenuity of the Cuban people who seemed able to repair absolutely anything.  Cuban women were very uninhibited about their attire.  Women of every shape and size, and of every age, wore bright pink or yellow spandex.

In spite of the trauma of our vacation, Ivaan was sorry to leave.  He'd made two friends in Havana: a stray dog he named Perrito and a lame bird he called Frosty.  As the food in the hotel was pretty much inedible, Ivaan collected all the roast pork he could find in the restaurant and took it outside to feed Perrito.  All the breads and cereals he could find were saved for Frosty.

To our amazement, when we returned home, the tour company offered us a replacement trip to Cuba, which we could use within six months.  Ivaan was determined to go back, if only to see Perrito and Frosty.  Not surprisingly, I put my foot down firmly.  Once was more than enough.
Posted by Eya at 1:12 AM No comments: 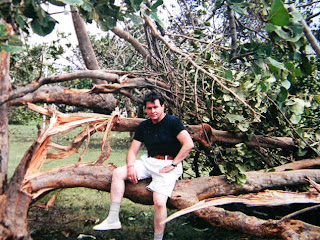 This morning, I found a little notebook that had been in my purse the week we went to Cuba.  My handwriting is pretty bad.  That's because most of the entries were written in black darkness.  But I'm getting ahead of myself.  Let's start at the beginning.

In 2001, Ivaan decided we should go on vacation.   He thought he'd like to go to Cuba.  I wasn't wild about the idea, but Ivaan's first stroke had taken place the previous year.  He was just regaining his confidence and his memory, and I didn't want to spoil his pleasure by hovering over him and second-guessing his every decision.    So Ivaan went to his travel agent and booked our vacation.   I vowed that I would just go along for the ride and keep my opinions to myself.

Three days before we were due to leave, the travel agent called Ivaan to tell him Hurricane Mitchell was due to touch down in Cuba during our stay.  She offered to postpone our vacation.  Ivaan declined.  She offered us another destination.  Again Ivaan declined.  He thought it would be an adventure, as he'd never experienced a hurricane before.  He opted for Cuba.  If he'd mentioned the call from the travel agent to me, I'm pretty sure I would have refused to go.  But he didn't.

I did not know Cuba had a national sumo wrestling team.  I also did not know Ivaan and I would not be sitting next to each other on the plane.
He was seated directly in front of me, beside a person of average size.  I had an aisle seat directly over the wing, beside a member of the Cuban national sumo wrestling team.   He might have been the captain of the team, for all I know.  He was that big.  He and his teammates, who occupied the rear half of the plane, were enjoying the flight immensely.  Every so often, my seatmate turned to shout something jovial to one of his compatriots or reached across me to beckon the flight attendant to bring him another beer.  They were clearly celebrity passengers on this flight.  I have never been so squashed in my life.

Four and a half miserable hours later, we arrived in Havana and were transported in a rickety bus to the saddest-looking beachside resort on the whole island.  We were taken to our room, which smelled so strongly of mildew we had to insist on another room.  By this time it was midnight. At 2 a.m. the telephone rang.  It was the front desk, telling us we should prepare to be evacuated due to the approaching hurricane.  Ivaan seemed suspiciously unconcerned about news of a hurricane, and confessed that he'd known about it all along.  We tried to sleep.  At 5 o'clock the phone rang again.  We were told to come to the lobby immediately.  We did.  Outside the main doors, a gigantic Mercedes Benz bus awaited us.  It must have belonged to Fidel Castro - or the sumo wrestling team. It was to be by far the only memory of luxury we took away from our trip to Cuba.

Two hours later, we were deposited at the entrance to a hotel in downtown Havana and instructed to go and check in.  No one at the front desk had heard of us, or of any of our fellow vacationers, most of whom spoke neither Spanish nor English.  I'd studied Spanish in high school, and Ivaan had lived in South America a couple of decades previously, so we talked our way into a room on an upper floor fairly quickly.  It was a very nice room.  Unfortunately, we didn't  get to see much of it.  After settling in, we went down to the lobby and were amused to  observe that the palm trees in front of the hotel were bent double by the wind.  We went outside and  took some photos of each other holding onto the trees.  If this was a hurricane, we told each other, it was no big deal.  We went back inside.  Hotel staff were putting masking tape on all the windows in the shape of an X.  Just a precaution, said Ivaan.

We returned to our room.  The front desk called and asked us to leave our luggage and come down to the lobby.  There we were directed to a large windowless conference room in the basement of the hotel.  Actually, all 500 guests of the hotel  were directed there.  Probably 498 of them smoked.  There were small children.  There were babies.  And there were two women who were members of the world's oldest profession. As the hurricane picked up momentum, the electrical power failed.  No lights...except for the glow of the ends of 498 cigarettes, illuminating the members of the world's oldest profession as they nonchalantly plied their trade.  When dinner was served, there were two choices:  you could have roast pork sandwiches, or you could have potato chips.   We spent three days locked in this windowless conference room in the dark, eating potato chips, drinking canned ginger ale  and breathing second hand smoke.  On the second day, Ivaan bribed some chambermaids to go up to our room and bring us some sheets and towels.  On the third day, when the hurricane was finally dying down, Ivaan resourcefully bribed the hotel employees to let us be among the first guests to return to our rooms.  We got into the front of a packed elevator and started our ascent.  We were about five and a half floors up when the power went out again.  Plunged into darkness, the elevator ground to a halt between floors.  That is where we remained for two hours.  I probably had the best position in the elevator, as I was jammed against the doors, so whatever air drifted in from the elevator shaft was blowing directly in my face.

"Tiene alguien fosforos?" asked Ivaan, and luckily a few of our fellow passengers pulled out their matches and cigarette lighters.  This gave
Ivaan enough light to reach up and remove the grill covering the overhead fan, increasing the air flow just slightly.  As the minutes ticked by, some of the passengers became grouchy.  Ivaan was still cheerful, though the exertion of removing the fan cover had caused him to break out in a sweat.  "Great sauna", he quipped.  "What time is my massage?"  A very large German lady standing right behind Ivaan snapped at him in a heavy German accent:  "Dat is NOT very funny!"  "Serves you right for the Holocaust", I hissed.  Just then we heard Spanish voices  outside the elevator calling to us and within minutes the doors were forcibly opened, between floors and we were able to jump to the floor below.

The adventure did not end here.  Things got worse.  But that's for another post, so stay tuned.
Posted by Eya at 11:04 PM No comments: