One of the interesting things about owning a jewellery store is hearing the bizarre stories about people losing their jewellery and finding it again.
Over the years, Ivaan has told me some remarkable tales, not just about the jewellery he has lost and recovered, but more often tales he's heard from other people about misplacing and then being reunited with their jewellery.

In 2003, our friend Neil Turnbull decided to celebrate several decades of marriage to the lovely Carolyn by getting himself  a wedding ring.  He's a landscape architect by profession, so wearing a wedding ring to work would be foolhardy in the extreme.  Neil's choice of ring was, as I recall, inspired by an Ivaan ring his daughter Emma wore, with the Lord of the Rings Elven text inscribed on it.

So Neil, who has giant fingers, ordered that ring for himself in red gold.  Honestly, it's so big, Carolyn could have worn it as a belt.  Ivaan referred to it as "size Finish".

Last year, Neil called to tell me he'd lost his wedding ring somewhere close to home.  Home is an enormous property near Sunderland, Ontario, with a pond and acres of land, a huge house, an art gallery, and not much chance of finding a ring, gigantic though it was.  He asked me to make him another, this time a bit more snug: size Almost Finish.  And just to vary things a bit, he asked for it in white gold.

So I made him his ring and off he went, happy as a skunk.

Last month, Neil called again.  Hard to believe, but he'd lost his white gold ring as well.  Now, here's the unbelievable part: he'd been sitting in his Stressless chair at home when he lost it.  He'd put his hand between the cushions and when he withdrew his hand, he felt the ring come off and fall into the cavity of the chair between the cushions.  So he stuck his hand back in, felt around and pretty soon located his ring.  He slid it back on his finger without even looking at it, and that was that until the next morning when he looked at his hand and noticed he was wearing a red gold ring.

Not much rattles Neil, but I have a feeling that he had a weird Lord of the Rings moment when he saw that red gold ring on his finger, and the inscription One ring to rule them all, one ring to find them, One ring to bring them all and in the darkness bind them probably ran through his mind.

But you don't get to be Neil Turnbull by sitting around pondering the mysteries of the Universe, so Neil promptly stuck his hand back in the crevice between the cushions of his Stressless chair and pulled out the white gold ring.  So now he has two wedding rings.  Either he'll bring one back to be sized down, or else he'll give it to Carolyn and she can wear it as a belt.

And now, because I know you've been waiting, here's Neil's ring. 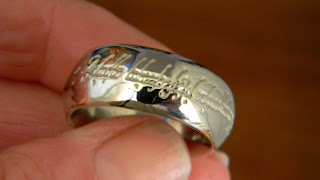 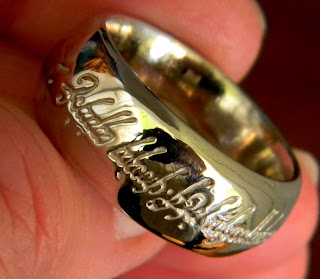 If you have a Stressless chair at home, I'm pretty sure you're plumbing the depths right now, between the cushions, hoping to find a couple of gold rings.  If you do, please let me know.