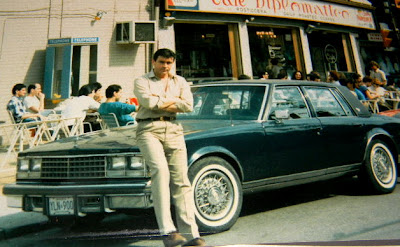 This is a photo of Ivaan with his beloved Cadillac Seville, taken in the summer of 1986. I was planning to write a blog entry about the day the Cadillac caught fire, but yesterday I was telling a friend a story about another set of wheels Ivaan had, and she suggested I post that story instead.

Ivaan suffered his first stroke in 2000, but it wasn't until 2002, when he suffered his second stroke, that we realized a wheelchair was going to become a permanent part of our lives.  Because both of the strokes had affected his vision, and paralyzed his right side, it couldn't be a motorized wheelchair. He'd lost vision in one quadrant of each eye, and so he'd never be able to see reliably enough to propel himself anywhere.

For the first three years we had the wheelchair, Ivaan resented it.  Any time we were out for a walk and ran into anyone we knew, he'd immediately tell them, "I don't really need this wheelchair, you know.  My wife just likes pushing me around."  Yet, we'd really have been stuck without it.  We'd had to give up a lot because of his strokes:  we could no longer participate in  ballroom and Latin dance, which we loved. I had to give up my beloved motorcycle, because if I'd had an accident I wouldn't have been able to look after Ivaan.  We had to accept that caregivers were necessary because I was still working.  It took a lot of adjustment, and it was frightening how fast life was changing.

By 2005, when the third stroke occurred, the  wheelchair felt like a member of the family with incredibly expensive taste.  We wore out our first pair of rear tires ($200) and the wheelchair was constantly being "tweaked" to make it more comfortable and useful;  a new seat cushion was $500, new hand grips, a back rest, heavy duty front wheels, brakes....if the Cadillac had been expensive to maintain, Ivaan's wheelchair was the Cadillac of wheelchairs.

In early 2008, after the fourth stroke, we sold our house and moved to a condo near Ivaan's hospitals.  By the end of 2008, Ivaan's fifth stroke had resulted in his death.  It was just me and the wheelchair.  Now, the wheelchair was so specialized that it really would not have been much use for anyone other than a left brain stroke survivor.  It had a specialized arm rest to support a paralyzed right arm.  Because of all the "tweaking", it was in fabulous condition, and it had been a very expensive chair, so I knew it would be very useful for the right person.

I decided to donate his wheelchair to Toronto Rehabilitation Institute, which was our second home.  Ivaan had been a patient there following the first four of his strokes and we were enormously grateful to the staff for their hard work helping Ivaan rehabilitate after each stroke.

The morning that I'd arranged to bring the wheelchair down to the Rehab for donation, I went over it carefully to ensure it was cleanly scrubbed and everything was tightened and adjusted.  It looked as good as new.  The only thing wrong with it was that Ivaan wasn't in it. It wasn't very difficult to manoeuvre an empty wheelchair down University Avenue, so I arrived at the Rehab pretty quickly, and took it to the office where I'd been instructed to drop it off.

I knocked on the door.  A staff member came out, looked over the wheelchair, handed me a form confirming the donation and thanked me, assuring me how useful it was going to be to other patients.  As I turned to leave, a sudden wave of emotion hit me. I knelt down, threw my arms around the empty wheelchair, and cried. It had gone from being the bane of Ivaan's existence to his liberation in the space of six years.  As much as it had trapped and confined him during the years of his illness, it had also set him free.
Posted by Eya at 7:56 PM No comments: