V IS FOR VINNY, VEGAN, AND VICTORY.

Vinny, my neighbour, knows I love rapini.  My "desert island" meal of choice would be some new potatoes with olive oil and a plate of rapini.   Yesterday, my nephew Angus did a fly-past, on his way from London to Kingston, and he stopped in next door to Vinny's Panini to order a breaded eggplant panino, which he brought back to Atelier Ivaan to enjoy.  He so much reminded me of Ivaan, because there was no point in talking to him while he was enjoying his food.  All his concentration was on his meal.  And that's exactly how Ivaan was.  The only difference is that Angus eats quietly, while Ivaan would moan softly as he chewed, his eyes half closed, when he was particularly enjoying his meal.
Angus couldn't stay for long, but just after I hugged him goodbye, the door to the store opened and in came Vinny, with a surprise he'd made especially for me.
Now, Vinny's Panini isn't vegan.  Not by a long shot.  The closest they get is the breaded eggplant, which Angus absolutely loved.  But Vinny knows I'm vegan and that I love rapini, so here's half of what he made me:
Why half, you ask?  Because by the time I remembered to get my camera out, the first half of the panino had mysteriously vanished, and I was wiping the evidence off my chin. Okay, in all its glory, here it is:  a very fresh bun, tomato sauce, red peppers, rapini in garlic and olive oil, sauteed onions, mushrooms.  It was heavenly. I suppose I could have saved the other half for dinner, but somehow I just felt like moaning softly with my eyes half closed.
Ivaan, if you read our blog, this panino is truly worth coming back to earth for, because in your immortal words, it contains ingredients.
Posted by Eya at 3:37 PM No comments:

Today, I felt a surge of brilliance coming on, and I just know it's a memo from Ivaan.  He has a way of letting me know when he wants me to get to work and produce something spectacular.  He even manages to let me know from which decade he'd like the brilliance to materialize.  Today, when I walked into the store, I had an urge to look at large, flat gemstones.  What caught my eye was a large, luminous oval Madagascar Labradorite: 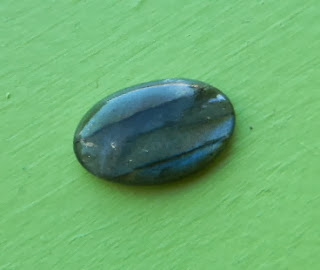 And then I started reminiscing about the beautiful work Ivaan did in the 1990s.  Looking through the waxes, I found a beautiful ring he made in 1993 - exactly 20 years ago.  Something about the cool simplicity of the stone seemed to call out to the intricate gorgeousness of the ring. Here's what the stone looks like, nestled into the ring like a toe in a slipper:
My mission, should I choose to accept it, will be to decide what metal to cast the ring in - although I do love it in blue wax.  I remember 1993 so well.  It was the year Ivaan suffered his first heart attack, on January 6th, in church.  So when he made this ring, he was in the throes of an incredibly creative surge which always followed a period of forced inactivity.  When I finish the ring and set the stone, I will post photos of it.

Ivaan, today is your birthday.  It's the last year of the decade you were in when you left the planet.  I miss you beyond all measure.  I know you are shining down on me; otherwise, where would I be getting surges of brilliance from?   After I finish up here in the Atelier Ivaan Slave Shop, I'll come to visit you, with some birthday cake for the birds and squirrels.

A BASKET OF APPLES

One of the things I love best about the location of Atelier Ivaan is the fact that we are next door to Vinny's.  Vinny and his wonderful mother, Mena, are the proprietors of Vinny's Panini, perhaps the most noteworthy Italian sandwich shop in Toronto. Ivaan loved Vinny's hot meatball sandwiches, though as his illness progressed he could no longer feed himself, nor could he eat sandwiches.  If he wanted a Vinny's meatball sandwich, it had to be deconstructed:  the meatball over here, the sauce in a little dish, and the bun over there.  He ate them in teaspoon size mouthfuls, one bite at a time. Feeding Ivaan half a Vinny's sandwich took forever, but it was worth it to see him enjoy his meal.

When I first bought this building, I went over to re-introduce myself to Vinny, and he remembered his former customer who preferred the deconstructed hot meatball panini.

I love being next door to Vinny.  He's the best neighbour.  When I need to describe to someone where I'm located, I can just say I'm "next door to Vinny's Panini".   Everybody knows Vinny's.   If I'm expecting a shipment, Vinny will watch out for the delivery truck.   When I have contractors working here, Vinny feeds them.  If I'm in the store late at night, Vinny keeps an eye on me. The customers at Vinny's are from the widest spectrum of society, all united by the love of a good Italian sandwich. Sometimes they'll stop in for a chat while they're waiting for their sandwich, and everyone has a good word to say about Vinny. Sometimes people even stop by accidentally: so eager are they to reach Vinny's door, they come in here by mistake,  blurt out "I'll have a steak sandwich to go, with rapini on the side" and they will suddenly look around, realize they're not in Vinny's, and start to laugh.

A few days ago, some broken glass at Vinny's gave me a chance to help out by doing what I love to do best:  sweeping.   And yesterday morning, Vinny arrived with a thank you gift, put together very artistically by his wife Jenny, following their apple-picking Sunday drive in the country.

Ivaan's favourite short story is entitled A Basket of Apples, by Shirley Faessler. It's a  beautifully written story about family, hardships and love, but most of all it's about neighbourhood.  Vinny's gift of apples reminded me immediately of this story. And once again, as I very often am, I was reminded how glad I am to be Vinny's neighbour.