THE McBINKEYS OF BONEHEAD: A CAT'S TALE

Lately I've been thinking about our cat, Pinky.  We found him as a tiny, feral kitten on the garage roof, a few years before we were married.  We'd heard a chirping sound and wondered if there was a bird's nest up there.  There wasn't.  There was a kitten. I guess all he'd heard were birds chirping, so he learned to chirp instead of meow.   We lured him down, over the course of several days, with saucers of milk positioned closer and closer to the back door of the house.  Within a week, Pinky moved in.

He was a tabby, and we thought he was a girl cat.  His nose and paws were very pink.  We named him Pinky in honour of Benazir Bhutto, who had just become the first female Prime Minister of Pakistan, and whose childhood nickname was Pinky.  It was some time before we realized Pinky was a boy cat. By that time, he was already answering to his name and we didn't want to traumatize him, so we kept on calling him Pinky.  As he got bigger, the neighbours started to laugh every time we called him in, so we gave him the street name of Ned.  But at home, he was Pinky.  Or Mr. Pink.  Or Jean-Marie Le Pinq. Or Pinkerton. Or Pinsky, on Jewish holidays.  Or Pinky McBinkey, whose ancestral home was in Bonehead, Sussex.

Pinky loved Ivaan, and the feeling was mutual.  Ivaan trained him to do tricks, something not all cats willingly do.  I wanted to take him for walks on a leash, but every time we put a leash on him, Pinky would flatten himself on the floor, like a fur rug.  So that wasn't happening.

Pinky was the cat of legend.  One mystery at our place was where all the cat food disappeared to.  He only ate the deluxe kind, that comes in tiny cans.  Or else baby food.  Or else cooked broccoli.  Or ginger snaps.  We decided that while we were away at work during the day, Pinky was running a restaurant on our back deck.  It was called The Cat Cafe, and it served tiny little cans of cat food.  But it also had a specialty dish on the menu, Salmon Philippe.  This is because two of our nephews are named Sam and Philippe.  The dish was named after them.

In the legend, Pinky rode a motorcycle.  His helmet was carved out of a tennis ball.


THE McBINKEYS OF BONEHEAD:  A CAT'S TALE
© 2018 Eya Donald Greenland

Oh, you don't know either?  Well, in 1941 the Nazis surrounded the City of Leningrad in Russia (now called Petrograd, or St. Petersburg), blockading it so that no one could enter or leave.  They wanted to take control of the city and they didn't want to waste ammunition by killing the inhabitants, so they basically just starved the citizens of Leningrad.

The Siege lasted for two and a half years.  Millions died of starvation.  Food was rationed at 125 grams per day per person.  Eventually one winter it was so cold that the lake on the border of Leningrad froze over and supplies were able to be smuggled in, but the death toll was tremendous.

Stories about the Siege of Leningrad are always told from the point of view of men.  Films show tanks and guns, fighting men and barking dogs.  Little is said about the lonely, desperate lives of women during the Siege and how they coped.

After Ivaan had told me about the Siege, he asked, "If you had to give up everything, what would be the hardest for you to live without?"  I instantly answered, "A hot bath.  I would rather do without food than a hot bath".    So we started telling each other a story, back and forth, about women during the Siege and how they managed.  We called our story The Bath Lottery.  We had always envisioned writing it as a play.

Life got complicated and we never got our play written.  Part of the reason was that neither of us knew how to write a play, but another part is that we kept on adding to and subtracting from the story, so it was a pretty fluid project.

Last year, I was moaning to my friend Mary Ann about wanting to write this play, entitled The Bath Lottery, and explaining that the reason I hadn't done it was because I did not know the mechanism for writing a play.  I wondered if I should take a course in playwriting.  Mary Ann wisely suggested that I write it as a story,  adding that once I had a story on paper, I could easily see if it could become a play.

So I wrote the story.  In fact, it poured out of me surprisingly quickly.  I sent it to my sister, who often reads things I write.  She was generally encouraging, but found it hard to understand why the story was so bleak.  She was hoping for some laughter and some female bonding at the end.  Clearly, this woman has never lived through a siege!  I've been hearing stories about the Holodomor, the forced starvation imposed by Stalin on Ukraine in the early 1930s, all my adult life, and I've witnessed first hand the Soviet-induced paranoia that is bred in the bone of everyone who has ever lived in Ukraine.

I then sent it to my friend Norah, who is a writer and whose parents were of Ukrainian heritage, so she understands the culture.  Norah forced me to clarify and to simplify.  It was so helpful to me to see the story from her perspective and I was grateful for her skill and generosity.

Having finished editing the story, I had to decide what to do with it.  I didn't even know if I liked the story any more.  I subscribe to a literary quarterly, Prairie Fire, and as they had a literary competition in conjunction with the Banff Centre and McNally Robinson Booksellers, I decided to submit the The Bath Lottery.  After sending it in, I was cringing, thinking it would be so amateurish compared to the offerings of the professional writers who enter and win literary competitions.  Eventually, I forgot all about it.

Last Tuesday, coming home from university, I saw a flashing light on my answering machine and started listening to the message as I was doing household chores.  It wasn't until the message was nearly over that I realized it was from Prairie Fire Press.  They were asking for my email address.
I thought they probably just wanted to send me a list of the winners, but I replayed the message and was dumbfounded to learn that I had won Second Prize in the short fiction category.  I had to play the message one more time to be sure I'd heard correctly.  Then I phoned Mary Ann. I was slightly hysterical: crying and laughing at the same time.  When I awoke the next morning, I just assumed I had dreamed the whole episode, so I played the message again, and there it was.

Then came the fun of having to compose a short bio of myself:  "Eya lives in Toronto.  She enjoys ironing.  She has terrific friends."  Then I needed a photo of myself.  My good friend Crystal sprang into action and came right over with her camera.  She took a whole lot of very professional photos of me.  I'm so glad I didn't submit that 'selfie' I was planning on using.  She made me look like my best self.  She's an excellent  friend that way.

So this summer, The Bath Lottery will appear in Prairie Fire.  Then there's all the other things: the prize money, the publication money, the book tour (only joking about that bit) and sharing with all my friends the excitement of this total coup de foudre.   Here's my picture, as it appears on the Prairie Fire Press website.  I've realized that The Bath Lottery will never be a play.  Not enough dialogue, too many scene changes.  But it's done, and I imagine when summer comes I'll be feeling pretty chuffed. 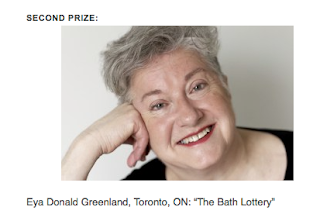