IVAAN AND THE SHOES ON HIS FEET 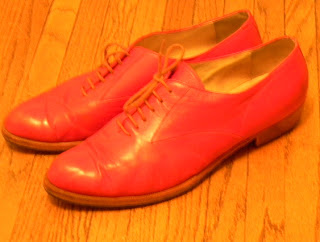 I'm saving Ivaan's red shoes.  They're quite well worn, despite the fact that he didn't wear them often.  He bought them in the late 1980s and was still wearing them, on occasion, in 1995 when he opened his studio on Queen Street West.  Ivaan liked the way they looked, loved the colour, which is much more red in actual fact than in the photo.  He took good care of them, as evidenced by the fact that they've obviously been to the shoe repair more than once.  Even at size 45, though, they were two full sizes too small, and definitely too narrow, which was no impediment to the pleasure he got from looking down and seeing them on his feet.

Ivaan had a complicated relationship with footwear.  He loved beautiful shoes and boots and he didn't just collect them; he wore them too.   In 1993, he went with his sister Nadia and her family on a trip to Ukraine.  As footwear for the trip, he insisted on taking a beautiful pair of black cowboy boots I'd bought him for his previous birthday.  Knowing they'd be walking a lot, I suggested he take some comfortable shoes as well.  Ivaan demurred.   He loved those cowboy boots and he was determined to wear them.  I was fairly certain he was making a mistake, so I bought him a pair of canvas espadrilles and hid them in the bottom of his suitcase.  He didn't find them until he was already in Ukraine.  Disgusted, he promptly gave them away to the first person they fit.  Two weeks later, when Ivaan returned from Ukraine, he insisted vehemently that his cowboy boots  had been the perfect choice of footwear.  It wasn't until years later, when one of the friends he had made in Ukraine came to visit us, that I began to hear stories about Ivaan's boots.  Apparently, they had hurt him so much that he was obliged to take taxis everywhere.  In Ukraine, those boots became the stuff of legend.  Frankly, he might as well have left them in Ukraine, because he never wore them again.

After we were married, I started exerting not-so-subtle pressure on Ivaan to buy shoes that actually fit.   It was a short distance from discovering the pleasures of well-fitting, stylish footwear to discovering the pleasures of spa life.    Our wedding reception had taken place at The Elmwood Club; soon afterwards, it became The Elmwood Spa.  Initially, it wasn't easy to persuade Ivaan that he might actually enjoy a massage, but one visit to The Elmwood Spa was sufficient to convert him. Henceforth, many of our vacations were spent at a spa.  He became famous at The Hillcrest Spa in Port Hope for booking two 90-minute massages, back to back.

As his series of strokes began to permanently limit his mobility, Ivaan reluctantly agreed to let me give him a weekly pedicure.  I can't honestly say he enjoyed them; he was so inured to the memory of his toes hurting inside too-small shoes, and he worried that I might hurt him.  But one day at his rehabilitation hospital, Toronto Rehab, one of his therapists, having removed his socks and shoes for a therapy session, marvelled aloud at how beautiful and well-kept his feet were.  Ivaan was delighted, cherished the compliment, and never complained about pedicures again.

As for me, I cherish the red shoes.  They're a reminder of a younger Ivaan - the man who was so "form over function" that he'd suffer pain cheerfully for the pleasure of looking down and seeing a handsome pair of shoes on his feet.
Posted by Eya at 10:03 PM No comments: