This is a photo of the first ring Ivaan ever made.  It was December, 1969.  I think he hammered it out of a silver quarter.  He kept this ring because, as he said, he'd probably have to pay someone to take it away.  For a first piece of jewellery, it's actually fairly complex:  a domed top with something like a sun or a flower on top, and leaves on the sides. 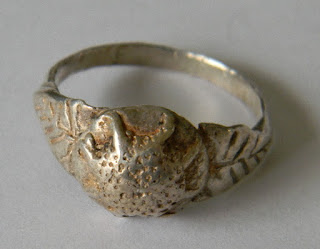 Recently I found the mould of the fifth ring Ivaan ever made.  It was sometime in 1970. The fact that the mould still exists, in excellent condition, 45 years later, suggests to me that he never used it, and in fact I had never seen this ring until I used the mould to make a wax. 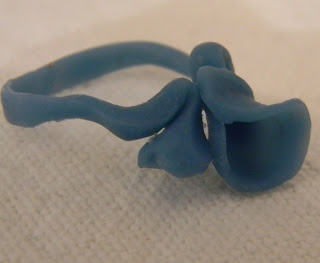 I instantly loved it, so I cast it in sterling silver, to see what the possibilities were.

Here, I've balanced a couple of diamonds in the mouth of the flowers, and I can see that it would make a fantastic engagement ring: the larger stone facing up, and the smaller one facing sideways. 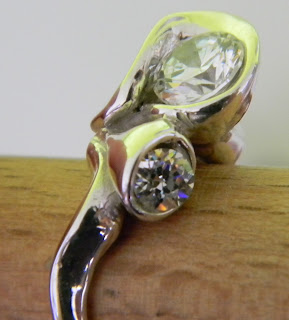 While I marvel at the  steepness of his learning curve, I marvel equally that, 45 years after he started creating metal art, here I am, reproducing his exquisite work.