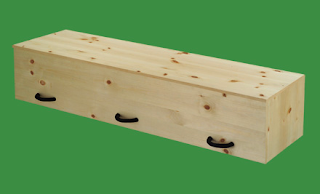 On November 8th, 2011 I posted the first half of The Coffin Story. I always intended to write the other half and here we are, three and a half years later, I'm still blogging about Ivaan, it's the middle of the night and I can't sleep.  So I'll tell the other half of the story and maybe that will have a soporific effect.

Once Ivaan had finished planning his funeral, he felt quite proud of himself. He'd never done anything organized in his entire life.  Even at our wedding reception, when it was time for him to make a speech, he realized he hadn't prepared one.  Fortunately, I'm never at a loss for words, especially when I have an audience, so we finessed that one quite smoothly and I doubt anyone noticed.

He'd made his own grave marker, purchased his own coffin, asked that I hand stitch a linen shroud, chosen a handsome photograph for his death notice, selected his pallbearers, decreed that no animal products would be served at the meal following his burial, requested baskets of bread to be placed in the foyer of the Cathedral, so mourners could take a slice or two to a park on their way home, and feed the birds and squirrels on behalf of their good friend Ivaan.  He'd chosen the music to be played at his Panachyda (prayers) and at the cemetery.  He'd bought us a plot in his favourite cemetery.  When he had concluded all the arrangements he could think of, he turned to me with profound satisfaction and said, "There! That's done! Now all you have to do is show up."

As it turned out, there were a few other details that needed to be attended to, once our house was sold and I'd moved us to our new condo on St. Joseph Street.  First, a plain pine coffin seemed a little hard and uninviting. So I sent out our friends Gareth and Meghan to buy me some pure cotton quilt batting, and I hand-stitched a white cotton mattress for the bottom of the coffin.  Then, I made a pillow out of linen,  embroidered IVAAN  in large silk letters on the pillowcase (just in case the Almighty had any doubts about who had just arrived at the gates), and stuffed the pillow with cotton and dried lavender.  When all this was done, I set up the coffin on the living room floor,  inserted the mattress and pillow, and climbed in, instructing our niece Justine to close the lid. Ivaan loved comfort, and I wanted to ensure the accommodations were up to his high standards. It seemed very pleasant in there. I could hear muffled voices in the room, and a few minutes later Justine slid open the lid and let me out.

Now, you may wonder why I was setting up the coffin on the living room floor. In fact, once we were living in the condo, we kept it in the kitchen.  I didn't want it to be in the storage locker, where things were often dusty, and there was no point in sending it to the funeral home in advance. Some people actually buy an Arkwood Casket and use it as a bookcase until such time as it is needed for horizontal purposes. But we got used to having it in the kitchen.

After Ivaan's death, the funeral home sent their staff to the condo to pick up the empty coffin.  I notified the condominium office that we would be moving a coffin to a waiting hearse during the late evening, when it would inconvenience the fewest number of residents.   They were horrified, demanded it be taken down via the service elevator and out through the doors used for moving furniture and garbage.  I refused adamantly. It was a stand-off. The condo board convened an emergency meeting to decide how to prevent the coffin coming out the main doors of the condo building. The funeral home staff were one step ahead. Instead of arriving in a hearse, they arrived in a van and casual clothes. The coffin was carried out, vertically, and whisked into the van while the emergency meeting was still in session.

Now, if you are Ukrainan, you are probably already horrified, so feel free to stop reading right now.

Another of Ivaan's requests was that immediately before his funeral, I dress him in his shroud, wrap him in his tallit, (a Jewish prayer shawl), help to lift him into the coffin, lay him out according to his instructions and close the lid.  I felt a tremendous sense of peace and honour, that I had carried out his wishes and been of service to him, as he had devotedly served me so often in our life together.

Ivaan had also asked for a length of red silk to be draped across the head of his casket, in the manner of the Cossacks whose eyes were covered with a red silk scarf when they died. Our friend Myron kindly had two pieces of red silk sewn into scarves, one for Ivaan and one as a gift for Ivaan's sister. Nadia and I were instructed to drape the silk over the coffin as the funeral started.

Because this is a story about Ivaan, naturally there's a humorous aspect. In our haste to put the lid on the coffin in the funeral home, we had slid it on backwards, and we were thus unable to insert the wooden pin that held the lid closed. As a result, we later realized that instead of facing the altar, Ivaan was facing the congregation and the red silk scarf covered his ankles. I'm always quite certain that he was secretly pleased to be able to see how many friends and acquaintances had packed the Cathedral to say a final farewell to him.