Ivaan's mother once told me the story of his birth in a Nazi slave labour camp outside Köln, Germany.  Soon after his delivery, the building in which he was born was bombed by the Allies, caught fire and his mother had to flee.  She picked him up, made the sign of the cross over him, said in Ukrainian, "I baptize you Ivaan" and ran.  Outside the building, it was dark.  She was hungry, exhausted and frightened.  She had no idea where to find Ivaan's father.  She was walking along a path clutching her newborn when a Nazi guard approached her. Terrified, she took off an embroidered belt she was wearing, and offered it to him. Wordlessly, he handed her a pear, by way of exchange. She took one bite of the pear and instantly felt herself start to lactate, so she was able to feed Ivaan. She felt that they had narrowly escaped death.

Ivaan's earliest memories of food were in the refugee camp after the liberation, when British Red Cross workers gave them chocolate.  They lived in refugee camps for four years, until they were sponsored to Canada by the Tywoniuk family in Smoky Lake, Alberta.  A year or two later, the Kotulsky family moved to Toronto and they started the daily task of accumulating enough food to feed the family.  Ivaan's father quickly learned that the Kensington Market was a source of free fruit and vegetables, as the vendors left their overripe or blemished produce out in the evenings.  He'd collect all he could carry, and bring it home. Neighbours on Wyatt Avenue, in the Cabbagetown area of Toronto, were generally working-class Canadian families whose diet included white sliced bread and canned goods.  Ivaan's sister remembers neighbourhood children being mystified by the fruit salads their mother would prepare out of the parts of the fruit that were still intact.

Ivaan's father was appalled by the Canadian diet. He used to say that Canadians were too lazy to chew their own food, and that's why they ate canned food.  Pre-chewed food, he called it.  When Ivaan started school, he longed for the kind of sandwiches his classmates ate: white sliced bread spread with mustard, and nothing else.  He was embarrassed that his own sandwiches were made of thick European-style bread, hand cut.  His father was not fooled, and insisted that white sliced bread, with its telltale brand name of Toastmaster, was therefore only intended to fit into a toaster, not as sandwich bread.

It's no exaggeration to say Ivaan was a picky eater as a child.  The sight of a drop of oil floating on the top of a bowl of borshch would make him scream.  There were many foods he would not touch.  He often told me how embarrassed his mother was when she learned that he had eaten a ham sandwich at the home of  his friends Bo and Len, and that he had asked their mother for another.  She had to telephone the boys' mother and ask her to explain how she made ham sandwiches, because finally here was something her Ivaan would actually eat.

The language of food permeated Ivaan's descriptions of people.  Someone who was pale or had the facial appearance of having been a premature baby "didn't cook long enough", according to Ivaan.  A gangly teenager with poor posture looked "like a glass of skim milk." Members of the Ukrainian community with fleshy faces that lacked the definition provided by high cheekbones were "potato people".

Many of Ivaan's youthful prejudices about food followed him into adulthood.  He would eat only extremely fresh bread.  He hated baked goods that did not have a well-developed crust.  He preferred that flavours not be mixed.  And he was famous for sending food back to the kitchen in restaurants if it wasn't exactly to his taste.  Once, soon after our marriage, he called a waiter over to our table and complained that his meal was not properly cooked.  "I like it burnt, the way my wife makes", explained Ivaan, a little too emphatically for comfort.  The  waiter fixed me with a pitying smirk.  "Oh, don't look at me", I replied.  "I'm not his wife; I'm just his girlfriend!"  It was one of those esprit de l'escalier moments, when you have just the right comeback, at just the right moment.

A few years before our marriage, I was upstairs in the kitchen baking bread and Ivaan was downstairs in his studio working on something.  I realized that I had an appointment with a real estate agent to see a house I had my eye on, and that I'd have to leave Ivaan in charge of taking the loaf out of the oven when it was baked.  This was a risky proposition.  He wasn't good at judging the passage of time, and he was never that interested in domestic matters.  Heading out to my appointment, I warned Ivaan that I'd be very irritated if I came back to a burnt loaf in the oven.

Returning an hour later, I did indeed find a tin in the oven, the contents of which were completely blackened.  Strangely, however, the oven had been switched off.  Opening the oven door, I removed the tin, and found that Ivaan had folded up a piece of black cloth in the shape of a loaf of bread, put it into an empty tin, and placed it in the oven as  a joke.  I still have the photograph Ivaan took of me when I removed the tin from the oven. It's a great photo.  Look at our cat, Pinky, yawning at all the excitement. 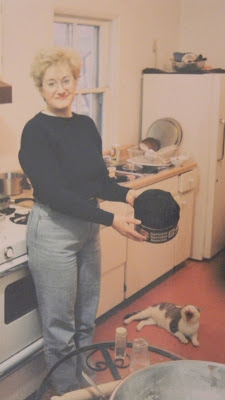 After our marriage, Ivaan seemed to believe - and who was I to disabuse him of the notion? - that the responsibility of a husband was to make his wife breakfast in bed every morning. My first breakfast after our marriage was...an apple sandwich.  Ivaan sliced up an apple, put the slices between two pieces of bread, and brought it to me on a tray. He got more adventurous with the passage of time, and on the morning of my birthday, three months after our wedding, he brought me a large bowl of Ataulfo mango slices, but no fork.  I was lying in bed with my eyes closed, picking slices of mango out of the bowl, when my fingers touched something that was decidedly un-mango-like.
It was a gorgeous sterling silver belt buckle which he had hand-engraved on the back "To my darling wife on her birthday", and the date.  Every time I wear it, I remember how lucky I felt that morning. 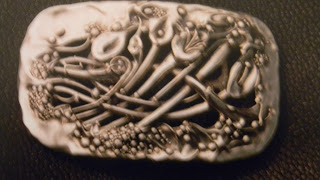 When Ivaan was presented with an item of food that was exactly to his taste, he ate it with total concentration.  There was no point in speaking to him; he just wanted to enjoy the moment.  His ultimate compliment for an item of prepared food was invariably uttered with a sigh of deep satisfaction.  "Contains ingredients", he would say.
Posted by Eya at 12:34 AM