In the same vein as the sterling silver egg that looks like crumpled satin (see 30 Pieces of Silver, Part Eight) this ring also has the appearance of fabric.  It's a very large ring, and I always feel very tormented when someone expresses an interest in buying it, because I love wearing it now and again.  Fortunately, it's also very heavy, making it expensive, and that's generally a good deterrent to potential suitors.

It is possible that Ivaan actually made this ring for himself, because it would have fit him, but I wouldn't be surprised if he found that it got in his way too much.  A whack with a ring like this could inflict a lot of damage on one of his beloved vintage cameras. His loss, my gain. Here's a view of the other side.  I tried photographing it head on, but it totally doesn't look like a ring unless I include a bit of the band. I'm not sure when he made this ring. As far as I know, there is no mould of it, but I think it was much later than the egg.  I'm guessing around 1999 or 2000. 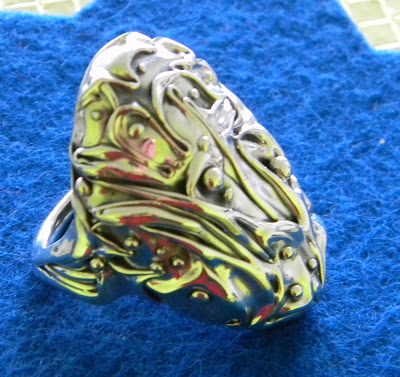