Food has always been very important to Ivaan.  I should have guessed this right away, because we met in a bakery.  As a teenager, I worked after school and on Sundays in the Harbord Bakery, a short walk from our family home. One quiet Thursday evening in early December, 1969, Ivaan walked in to the bakery: this elderly bearded guy, wearing a sheepskin jacket. His Volvo was parked outside.  He bought a small loaf of light rye bread and a jar of Strub's new dill pickles.  I still remember the bread cost zwei un' dreisig - 32 cents in Yiddish.

We started chatting, this old geezer and I, and he mentioned that he used to go to Harbord Collegiate, that his name was Ivaan, and that he was a photographer with Maclean Hunter Publishing.  I went to Harbord at the time and I began to realize that this must be the person I'd often heard my teachers speak about with awe: a former student who was an award-winning photographer and who had gone on to a successful career in the magazine industry.  We exchanged small talk about the teachers, but I didn't let on that I'd heard about him.  After all, with that beard and sheepskin coat, he could easily have passed for somebody's grandfather.  And that Volvo - sheesh, my father drove a Volvo.

So that is how I met Ivaan, the elderly geezer of 25.

Many years later, his mother would tell me how he'd scream at the sight of the slightest drop of oil floating on the top of his soup, how he loathed organ meats, and how embarrassed she was when she found at that he'd eaten two ham sandwiches made by his friends Bo and Len's mother.   I don't know if she ever heard about the fried egg sandwich he ate the day he became a stowaway on the vegetable truck. If she ever did hear it, she wouldn't have believed it.  Ivaan, eating a fried egg sandwich?  Not a chance!  His sister often told me the story about their family doctor, Dr. Volpe, who diagnosed Ivaan with "spring fever" one year when he was eight or nine, and prescribed grapes as the remedy.  Ivaan stayed home from school for a month snacking on green grapes.  His sister always felt that he received preferential treatment - and she was right.  It must have been like being the elder sister of the Baby Jesus.

The first food I ever saw Ivaan eat to excess was a very simple soup called potage parmentier.  It's a water-based leek and potato soup with butter, salt and pepper.  Occasionally, when Ivaan was on a working binge, I would make him a large jug of it, about three quarts, and drive it over to his place, still hot from the stove.  He would literally stand on the verandah and drink it right out of the plastic jug, the whole three quarts. A decade later, when we were already married and had a big industrial vegetable juicer, I'd make him carrot and ginger juice, perhaps with a beet thrown in for good measure. He'd gulp down a huge glass of it and he'd say, "It never even hit my stomach.  It went straight to my veins".  He claimed that drinking an enormous glass of fresh carrot and ginger juice simply made him feel more normal.

Ivaan definitely appreciated my simpler cooking. Porridge was very important to him.  It had to be cooked just a certain amount, with slightly more salt than strictly necessary, and then it was eaten with an Aero chocolate bar.  Some people, hearing he ate his porridge with chocolate, assumed he must have stirred melted chocolate into his porridge.  Not a chance.  Ivaan loathed that. The  bar of chocolate sat on its wrapper beside his bowl of porridge.  Each section was broken off, then broken in two, and a piece of that was placed on top of each spoonful of porridge.  That's how it was eaten.  And that's how the Plemeniks (our nephews) learned to eat porridge as well.  Frequent visitors at our place, their early eating habits were hugely influenced by Avunculus, their nickname for Ivaan.  Our youngest nephew, Ivor, had a reputation as a picky eater at home.  At age five or six, he'd been staying with us for a few days when his parents arrived from out of town. I set the table for dinner and just as his mother walked into the room, Ivor asked me, "What's for dinner?  Oh, my favourite: tofu cutlets, steamed spinach and mashed turnips." Ivor's mother turned to me in disbelief and asked, "Where have you hidden my son?"  Ivaan's mother, had she been still alive, would have been equally shocked to see her own picky eater enjoying the meal.

Many of Ivaan's stories were about how he discovered unfamiliar foods: pistachios for example.  Offered some by a school friend, he complained that they must have gone bad, because they were green on the  outside. At Ryerson, a Photographic Arts classmate gave him his first ever cherry tomato. Ivaan bit into it, not realizing the hazard, and was embarrassed to find that he had squirted tomato juice and seeds all over his classmate's shirt.  For Ivaan's 30th birthday, I made him a chocolate cake called a Reine de Saba (Queen of Sheba).  I'm sure I have a picture of it somewhere, because Ivaan took many, many photos of it.  It never occurred to him that the cake might have been edible; he just liked the look of it.  Tomorrow morning, I'll look for a photo of the Reine de Saba and post it.

Threee months later....well, that was an ordeal.  I finally found a transparency, projected it on the wall and photographed the image.  The cake looked much better in the original photograph.  But you get the picture. 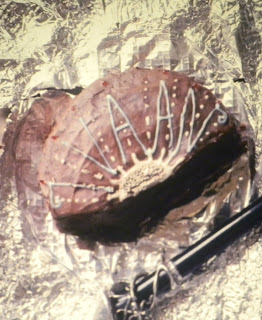