It's relatively easy to select pieces to include in 30 Pieces of Silver, at least in the early stages of the project.  I'm sure it will become quite difficult when I'm selecting the last few pieces, because there will be so many more that were not selected, and deserved to be.  Nonetheless, here am I, posting one that I struggled with.

This is the ring with which Ivaan proposed to me.  I was on my way out the door to work, briefcase in hand, wearing my leather jacket, my motorcycle helmet and boots.  I had a busy day ahead of me and I was running late.  The last thing I was expecting at that moment was a marriage proposal.  Seeing Ivaan down on one knee on the living room floor, I assumed he was having another heart attack and I inexplicably burst into tears.

It goes without saying (I guess) that I didn't end up wearing it as an engagement ring for long; it was too big and too small at the same time.
The band was too tight for my ring finger, and the top part didn't fit inside my motorcycle glove.  I didn't select this ring for its sentimental value, and I don't even think I chose it for the workmanship.

I chose it because it's an excellent example of Ivaan's ability to see beauty where most people don't even bother to look.  The emerald in this ring is a "beach emerald" - a piece of broken Seven Up bottle he found on the street. He clearly applied the wax directly onto  the piece of glass, and cast the whole thing in silver, praying that the glass would not melt or shatter during the the casting process.

At least I don't have trouble figuring out when this ring was made.  It was before I said yes, in late 1994. At least I think I said yes. Here's the other side of the ring, in case you're curious. 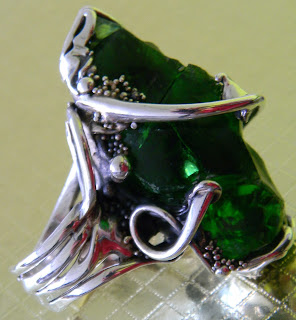