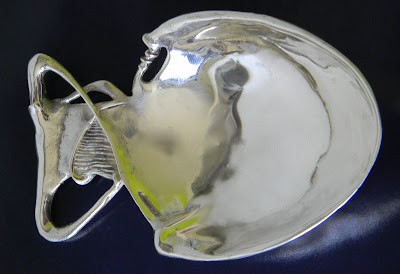 I'm starting to appreciate the monumental significance of Ivaan's body of work for the Art Gallery of Ontario's 1979 Treasures of Tutankhamun collection.  1979 was the 10th anniversary of the beginning of Ivaan's career in metal arts, and the Egyptian collection certainly involved by far the most historical research.   Recently, I found a book of excellent photographs of the actual pieces that formed the basis of the AGO exhibition.  You might  have expected a book like this to have been in Ivaan's library.  In fact, I doubt he had ever seen it.  I found it on the lawn of a neighbour's house, among a boxful of books they were giving away.

This piece is a sommelier spoon, used by wine tasters.  What I love about it is that it's not slavishly Egyptian, though there are many features characteristic of the age of Tutankhamun.  The bunches of grapes and vines on the underside are characteristically Ivaan's.  So is the shape: it looks a bit like a flounder. Yet there are the striations on the front handle that represent bullrushes, and that part is very much an Egyptian influence.

I can easily imagine Ivaan poring over this book of Egyptian photographs, and asking me to read him the text.  We were so well matched in many ways, primarily the ways in which we were opposites.  One of the most predominant was that he loved to be read to, and I love reading aloud.  Who would have thought that I'd be the one silently carrying on his legacy?  One of my big regrets is in not having taken the opportunity, while I had it, to learn more from him about this collection, which has become so important to me, and was instrumental in developing the artist he eventually became.