There's a tiny wooden cottage on my property.  I've been avoiding it like the plague.  If you are short-sighted and squint your eyes when looking at it from a distance, it looks almost charming.  On closer inspection, it's not.

Words like squalid, derelict, neglected and horrifying come to mind, the closer I get to it.

Part of the problem is the location.  It sits at the east end of Pond One, at the bottom of a hill.  In fact, its south wall is built right into a hill.  Looking out through the south window, I can almost imagine Peter Rabbit, Mrs. Tiggy Winkle and Tom Kitten going about their business on that hill. 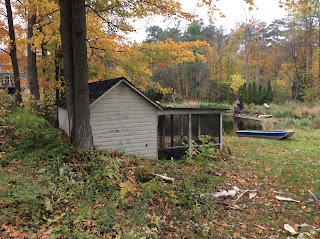 The first spring I was here, the land around this cottage flooded badly, almost knee deep.  It was August before the water had dried out enough for me to come close to the front door.  I imagined that the flooding was because the water level in Pond One was especially high, so I built a partial stone wall around that edge of the pond to keep the water back.  It worked only to a degree, and this year I was still ankle deep in water till late summer.

The cottage had a poured concrete floor and a screened-in porch with patio stones on top of a cement foundation, and though there was moss growing on the patio stones, the floor of the cottage was elevated and was perfectly dry.

My first instinct was to remove the screening from the porch.  Birds flew in regularly and couldn't find their way out.  It was distressing having to remove the ones that had died in their vain attempt to exit.  The absence of screens helped with air circulation.

In recent years, the cottage has been used as a pump house. There's an elaborate underground network of thick hoses on the property, which enabled former owners who were avid gardeners to water the grounds with pond water.  This meant, though, that one room in the cottage was devoted to pumping equipment, a tank, and lots of heavy duty plumbing.

There are only two options if you have an outbuilding like this on your property: one, you can have it demolished and hauled away.  It will cost you several thousand dollars and you will have nothing to show for it except a patch of concrete.  Two, you can gut the interior, do whatever repairs you wish, and put a new roof on.  This will also cost you several thousand dollars. Then you can paint the outside and hope that the next owners will be short-sighted and squint a lot.  What you cannot do is nothing.

I summoned up my courage.  I went inside.

I promptly revisited my principles about wasting money, and let it be known that I'd pay one thousand dollars cash to anyone who agreed to gut the place for me.  That involved pulling off the wood panelling, removing the insulation and the pumping equipment and sweeping it clean. 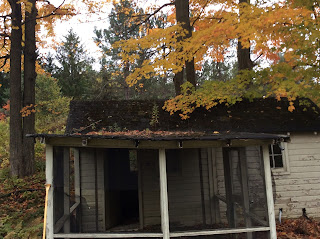 There were no takers, and honestly, can you blame them?  So I hired myself.  I'm no stranger to hard work. First I went inside and opened all the windows.  This is a project that's going to take me a while.  Luckily it's going to rain for the next few days, which means I'll be spending my time in the nice big house on top of the hill, cleaning.  That's what I do on rainy days.  I clean. Meanwhile, I'm summoning up the courage to start disconnecting the pumping equipment in the second room of the little cottage.

Follow along for updates if you are curious and have a strong stomach.  Otherwise, it's been nice writing to you.