BLEAK HOUSE: Beyond the Screamed In Porch.

I was dreading my trip down to Bleak House today.  In fact, I avoided it for so long, I had to put my work jeans into the dryer to warm them up to encourage me to put them on and get to work.  That did the trick, and by two p.m. I was masked, wearing eye protection and walking bravely through what I now call the screamed in porch.

First, I'll tell you that leaving all the windows open was brilliant.  The little house is much less oppressive now that air is circulating.  It's also brighter, and that's important, because all the electrical power to the house is shut off.  Here's a photo of the view out the south window onto the little hill into which the house  is built. 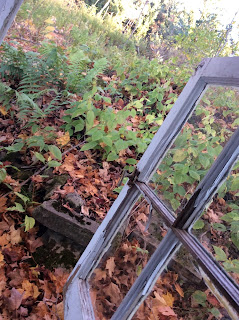 So that's a cheering-up sight.  I'm delighted to say that all the news today is good news.  I finished pulling the sheets of panelling off the walls of the first room, and made a couple of excellent discoveries.  First, there is a partition wall separating the two rooms.  Removing the panelling from the partition wall was incredibly difficult.  Eventually I realized why: because it was covering a wall that is actually in good condition.  My heart soared when I absorbed this happy news.  See that?  It's dry, it's white, and it's in good condition. 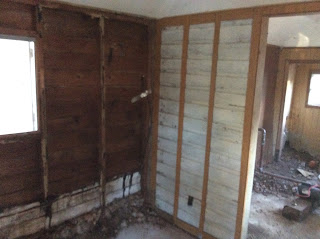 That wasn't all the good news, either.  You see the rotten wooden joists on the wall where the window is?  I bet you think that's a problem, don't you?  It's not.  I know how to "sister" joists to solve that problem, and I have some old-style two-by-fours here that I can use to do the job in no time and at no cost. 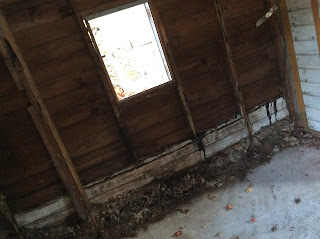 Now, you see what looks like moldy white boards at the base of this wall?  I inspected them carefully to see what I needed to do to replace them, and guess what?  They're not boards.  It's a poured concrete foundation wall. You have no idea how thrilled I was to see this.  What I thought were roots that had grown through the wood are not roots at all.  They are probably just a rotten four-by-four.  I'll crowbar that sucker out of there so fast.  You have no idea how much I'm going to enjoy this part.

My nephew Sam dropped by this morning to pick something up. Because he often works in the plumbing trade, I asked him what was the fastest way of disconnecting the pumping equipment in the second room.  He suggested that I saw through the thick hoses.  As it happened, I had taken a hacksaw down to the screamed-in porch, and it was even simpler that I'd ever imagined to saw the hoses in two. 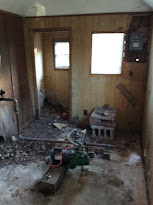 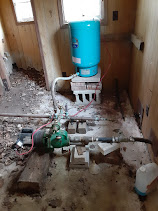 See what I did?  That blue tank is no longer there.  Now it's lying on the lawn, waiting to be disposed of.  I'm tempted to call an electrician to help me disconnect the thick red cable running from the electrical panel to the green pump.  I know all the power to the cottage is shut off but it's a pretty thick wire, and it's red, and you know what colour a stop sign is, don't you?
I downed tools at six p.m. as dusk was falling. I can hardly wait till tomorrow.