The first sign that a scarecrow had come to live at my new home was in late June, 2019.

An early morning phone call from my neighbours to inform me that a snapping turtle was laying eggs in the middle of my driveway had me at the gates to my property clad only in the very first items of clothing my eyes had fallen upon:  an ancient forest green terrycloth bathrobe in a herringbone pattern that had belonged to Ivaan, and a pair of black rubber boots.

The only reason I still had Ivaan's ancient bathrobe was because if I was having a restless night, putting it on was a surefire way of falling back to sleep. It was like a security blanket, and like security blankets, it should never have seen the light of day.

But I had never seen a snapping turtle, I didn't know how long it took to lay turtle eggs, and I figured if my neighbours were calling me at crack of dawn (okay, maybe it was nine o'clock), the least I could do was show up.

If the neighbours were taken aback by my informal appearance, nothing about their demeanour suggested it. Frankly, we were all more excited about the egg-laying than anything else.

As spring turned to summer, I found that once the swimming pool was up and running I often didn't bother to fetch a bathing suit when I wanted to go for a swim.  I wrapped myself in an old orange silk Japanese kimono that my sister-in-law had left here, ditched it on the diving board, and dove right in.  If I had guests or family visiting, of course I went upstairs and got a bathing suit to wear, but if I had guests I  usually wasn't swimming at all. They were swimming, and I was either cooking, doing dishes, or both.

I learned very quickly that mosquitoes are attracted to dark colours, so I collected whatever white clothing I had and earmarked it for work wear. It didn't stay white for long, because I quickly gave up sorting laundry. I had a pair of heavy denim jeans, rubber boots, white T shirts and enough insect repellent that I pretty much applied it with a paint roller.  There was one kind that I put directly on my skin, and a much stronger stronger kind that I sprayed on my clothing for extra protection.

Visiting family used to look horrified at the idea of using insect repellent.  Didn't I have something more natural, more organic, more attractively packaged, more delicately scented?  No.  Quite frankly I didn't.  But I had 18 infected mosquito bits on my stomach alone, and if they knew anything about country living, they'd know that mosquito bites never itch till 4:30 a.m.  This explains why I sometimes needed Ivaan's old bathrobe to help me get back to sleep.  Last summer was a horrible year for mosquitoes.  It was also the year I learned to mix baking soda and water into a paste and to coat myself with it before bed to stop the itching.

Last summer was perhaps the most exciting summer of my life.  I learned a million things, I made a million and one mistakes, and I worked incredibly hard.  I also perfected a work outfit.  It consists of my heavy duty denim work jeans, my rubber boots and a blue and white striped men's shirt that I bought at a vintage clothing show.  The shirt has pockets big enough that I can button my phone into one of them if necessary, but generally I don't bother bringing a phone with me when I'm out on the land working. 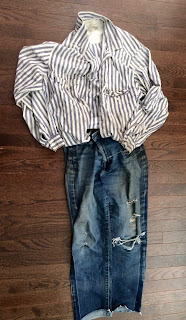 As you can see, the knees of the jeans are worn through in multiple places, so this year I've upped the choreography by turning them into cut-offs, and last week I bought a new pair of jeans just in case anyone comes over, but my preferred work outfit is the cut-offs and the shirt.  I have a well fitting straw hat for keeping the sun out of my eyes.

By my calculation, I've worn a dress three times in the 16 months I've been here.  I've worn stockings twice and high heels once, for a trip into town.   But mostly I'm comfortable in my work outfit.  And since 2020 is the year that there were fewer mosquitoes but tons of crows, it's just as well that there's a living, breathing scarecrow that comes with the property.