I bet you thought I would quit.
Yesterday I realized that it was going to be hard to replace the roof on Bleak House because one branch of a nearby maple tree was closely overhanging it. I studied the problem and realized that my only option was to take the tree down.  This maple tree was half way up the little hill into which Bleak House is cut.  There was perhaps a 30 degree window of space for the maple to fall after I cut it.  If it fell to the right, it would crash through the roof.  If it fell to the left, well, frankly, it wouldn't fall.  It would get trapped in the branches of another maple tree beside it.
One of the ways I relax is by watching YouTube videos of chainsawing techniques, so I knew precisely the sort of cuts I'd need to make.  The pressure to do it right was on a little bit, because some workmen were excavating on the property to the north of me, and I knew they had a clear view of what I was doing.  It wasn't a huge tree, maybe 22 feet high, with a ten inch diameter.  So I planned out my cuts, took the chainsaw to it, and in five minutes the tree came down perfectly in the perfect location. I expected a round of applause.  None came.  I cut it up the branches, put down the chainsaw, and went into Bleak House.
I always knock on the door before entering.  This is a bit superstitious, but I'd rather give any visiting wildlife notice of my arrival so they can make a swift exit.
And then I decided I'd finish the job of gutting the little house, then and there, if it killed me.
The electrician is coming tomorrow to put in a new outlet so I can plug in power tools.  I wanted it to look presentable for him, so he doesn't think I'm a slob.
It took me two or three hours, but I'm thrilled to report that it's done and dusted. 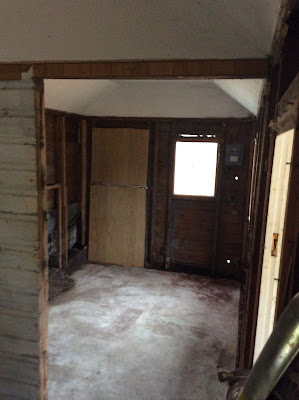 You'll notice that I used some of the wood panelling to block off the little bump-out addition to the left of the window.  I'm planning to tear that down from the outside. 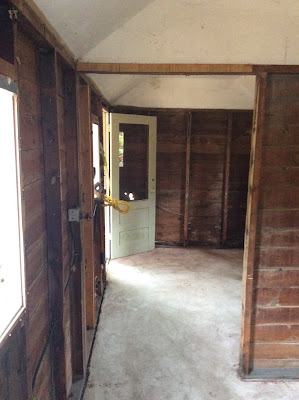 And here's a view in the other direction. 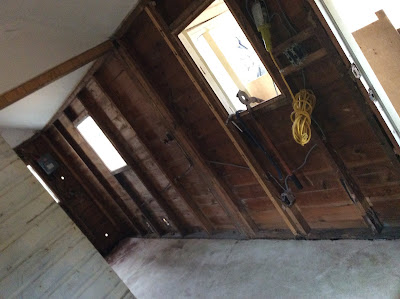 This is the north wall. 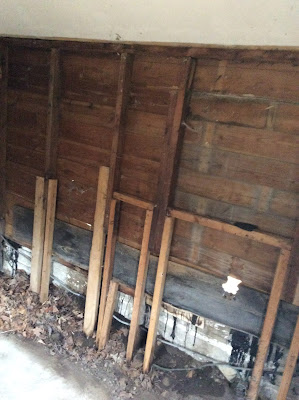 This is the south-west wall, the scariest wall of all.  I imagined it was going to be much worse. 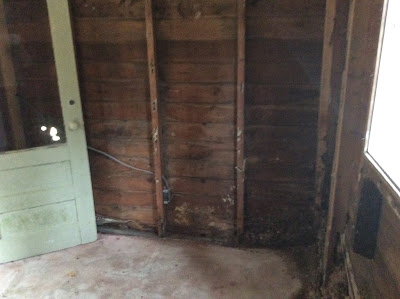 And this is the east wall.
Today is a milestone.  I've hit rock bottom.  Nothing I have to do to Bleak House will be more horrifying than the work I did today.  From this point on, it's going to be uphill all the way.  Tomorrow when the electrician comes, I'm going to tear out all the old electrical wiring and start repairing the exterior shell.  I look forward to having a light and the ability to use power tools.  And I've decided on an exterior colour scheme.  The walls are going to be cream-coloured and the roof is going to be green.  I'm thinking of doing the inside in cedar shiplap.  But let's not get ahead of ourselves, shall we?
Posted by Eya at 7:02 PM