It's Hallowe'en and down at my little haunted house on the hill, I was waffling about whether to get back to work. I don't like working in the cold and this morning the thermometer read seven below zero.  I woke up to frost all over the ground.  Even the ponds were frozen, and some Canada Geese were acting as icebreakers on Pond Two. Eventually I decided that I'd go out and split some logs in the carport and if it went up to five degrees Celsius I'd get to work on Bleak House.

My job this week is to finish tearing down the bump-out on the west side.  It was an addition to the original house and I'd like to have a word with whoever constructed it.  This is what I'd like to say:  a four-by-four is not the same thing as two two-by-fours.  No matter how much you like pounding nails into two-by-fours,  could you please just get up off your backside, go to the lumberyard and buy yourself some four-by-fours for the corners, next time you want to frame out a tiny addition to ... well, just about anything really.  Thank you.

I spent at least an hour alternately pulling nails out of two-by-four framing, hammering them all the way in, and bending them into an L shape.  It was the most wasteful waste of time.  Here's the scene of the crime. 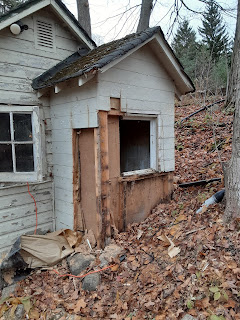 Ripping the wood siding off the addition is not too difficult, but avoiding all those nails in the framing is almost impossible..  I wish a giant magnet would swoop down from the heavens and suck all the nails out.  I've got an electric reciprocating saw and two chainsaws on the job, a claw hammer and a crowbar, yet progress is glacial.
Here's a view from the rear: 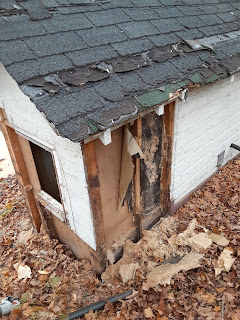 And here's a general view of the demolition site from half way up the hill.   On the left is the stump of the maple tree I had to take down.  I'm beginning to wish the maple had crashed down on the roof and demolished the entire building. 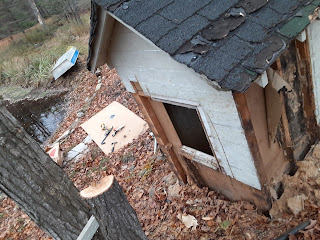 I don't think I realized how much lower the interior of the bump-out is than the outside of the building.  Here's a view down into the excavation.  This chilling aspect gives you an idea of how badly I want to demolish it. 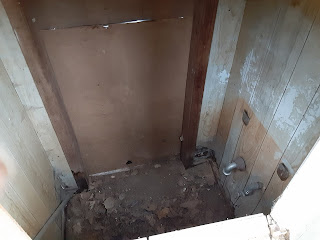 At a certain point as I proceed with my labours, the shingled roof is going to collapse.  It's got four layers of asphalt shingles on top of rotting plywood.  That stuff can hold a lot of water.  But I hear in about ten days it's going up to 15 degrees, and I can't wait to show you how excellent the interior of Bleak House is beginning to look.