If I don't document my progress by way of blog posts, I worry that I am going to lose my nerve and turn back.

I took a couple of days off, but I am planning to continue tomorrow. Yesterday it rained heavily, and the rule around here is: when it rains, I clean the house. It's a large house, but it's easy to clean, and I enjoy doing that in bad weather. Today, on the other hand, was sunny and dry, but surprisingly cold, so I went out to the carport to split some apple and cherry logs. This is what my late father would have described as "sorting my paperclips according to size".  I was procrastinating.

I had promised some people I know in Toronto that I'd bring them a load of fruitwood for their backyard meat smoker, and it was really pleasant sitting on a stool in the shelter of the carport splitting logs.  It takes no effort; you just put a log on the splitter, push one button and one lever, and four tons of hydraulic force shows up and splits the log for you.

In less than an hour, I'd split perhaps 120 lbs of fragrant fruitwood.  The carport smelled glorious.  I loaded it up in four heavy bags.  Then I walked out onto the driveway and marvelled at what a beautiful day it was: cool, crisp and colourful.  A gorgeous day for a drive.  And the car hadn't been out on the highway for quite a while.

Next thing you know, I'd texted the people with the smoker to say I'd do a fly-by at their front door at 2:15 p.m., loaded the bags of wood into the car, and I hit the road. It was a perfect highway trip, and an hour later I was in downtown Toronto unloading bags of fruitwood onto their porch.  After a brief stop to buy some vegan doughnuts, I headed home.

So you see what I'm doing here:  I'm still procrastinating.  When I got home, the carport still smelled of apples and cherries, so I split a few more logs, went inside and lit a fire in the fireplace.  I had dinner sitting in front of the fire, which is not strictly permissible in my nice clean living room.  But I was being good to myself, as the real work starts tomorrow.

I'll break you in gently.  This is the screened-in porch. 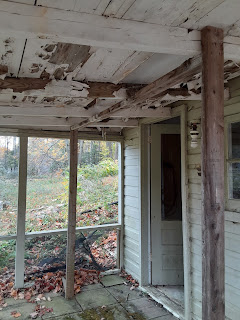 You can probably see that the first step was to remove the screens to create some air circulation.  And the next step was to bring garbage bags.  There's not much inside the house, but whatever there is, I sure don't want to keep it.  You might observe that the screened-in porch is only meant for small people.  The ceiling is less than 6 feet high. 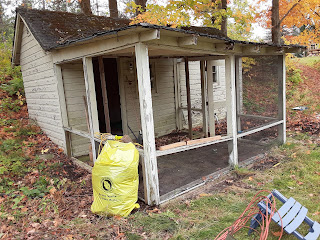 I was surprised, once I ventured inside, to notice that the front door was fitted with a deadbolt.  I'm very doubtful that anyone would want to lock themselves  in.  Anyway, we're inside now. 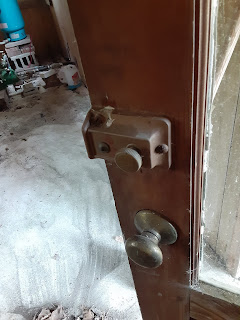 The house has two rooms, plus a little addition on the west side.  The first room is grim, but it's the more luxurious of the two. 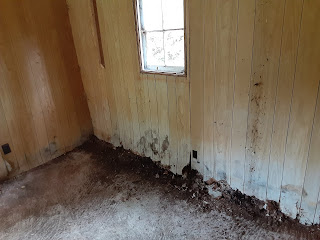 You still with me?  I'll describe the decor, just to ensure you get the full picture.  There is wood composite panelling on the walls and a concrete floor.  First step is to remove the panelling. 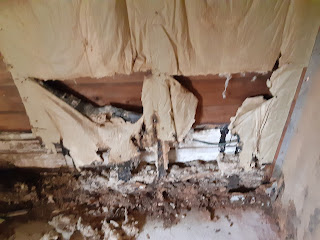 Under the panelling, there's fibreglass insulation. It's surprisingly dry till you get to three feet above the ground.  Below that, it's not so much damp as it is decomposed.  It has broken into clumps and is lying on top of some roots which have grown through the exterior.  The roots are surprisingly hard to remove.  So I move on to the next room, which contains the pumping equipment. 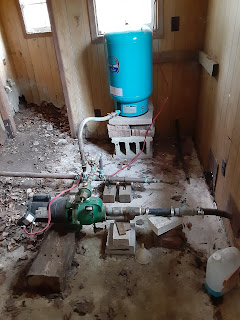 Honestly, if there were a lightning storm tonight and the little house caught fire and burned to the ground, I would not even call the volunteer fire department.  And if the gigantic gnarled willow tree beside the house blew over and landed on the roof, the only tears I'd shed would be tears of joy.

I suppose you think I'm going to quit, don't you?  Let's see how I feel about it tomorrow.