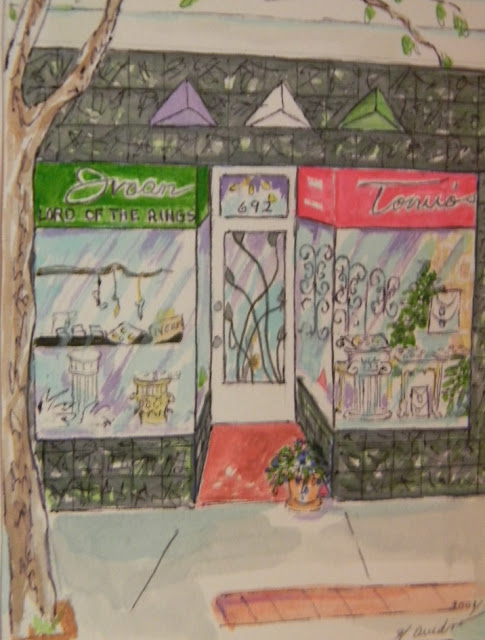 After Lowon Pope outgrew their shared location at 692 Queen Street West and moved across the street, Ivaan's friend Tamas Mozer moved in.  No two guys were more dissimilar in terms of style. Ivaan was upbeat and gregarious; Tamas was quiet and serious. Ivaan was entirely self-taught in metal arts; Tamas was a classically-trained jeweller.   Ivaan was disorganized; Tamas was meticulous.  Sometimes it seemed as though Tamas were fighting a losing battle against utter chaos.  One thing they had in common was a dislike of being interrupted by someone coming in to order something when they were busy working.  However, if someone wanted to come in for a chat,  or to drag them out for a coffee or a pizza, well, that was another matter.  692 Queen Street West was almost like a social club.  Ivaan used to claim that there was a secret tunnel  under Queen Street, connecting their store to Dufflet's Pastry Shop, and that it had been carved out with a dessert fork.
In 2001, someone came by and offered to do a watercolour sketch of their store.  Today I found the sketch in Ivaan's journal.   It's not overly realistic - the actual shop wasn't so pretty looking and Ivaan's side of the window was rarely that neat, but the artist captured some of the uniqueness of Ivaan Fine Metal and Platinum Plus. Siobhan, this post is for you.  I hope it brings back some fond memories.
Posted by Eya at 11:30 PM