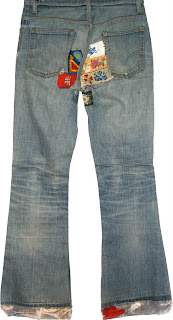 These are Ivaan's jeans, circa 1969.  Ivaan sewed on each of the patches by hand.  His needlework is remarkably fine.  They are hemmed in baby blue crushed velvet.

These jeans became the symbol of a remarkable 40-year retrospective of Ivaan's life in metal arts, entitled:  All That Matters:  The Art of Ivaan Kotulsky in Retrospect, which opened at the Ukrainian Museum of Canada (Ontario Branch) on January 23, 2009 and closed on October 31st of the same year.

The co-curators, Sonia Holiad and Daria Diakowsky, created an inspired exhibition in the gallery space at St. Vladimir Institute on Spadina Avenue in Toronto.  Work began on this very comprehensive exhibition in August of 2008, and it is fortunate that Ivaan lived to play an active part in providing the curators with historical information about his work.  Although he died about six weeks before the retrospective opened, his presence was very much felt by the Museum staff, our family, the curators, our friends and members of the public who attended the Museum.

Three receptions were held while the retrospective was in place:  the first was the opening on January 23rd, the second occurred in March, and the final reception was in honour of Ivaan's 65th birthday, on October 9th.

Ivaan's beloved blue jeans were hung on a door as part of the exhibition, in an area where a mock-up of his work table was set up, with some of the tools of his trade, plus his trademark red leather shoes under the table,  and one of his silk shirts with silver buttons handmade by Ivaan, draped over the back of his chair.  It looked exactly as though he'd just gotten up from his work table.  The display included a half-eaten butter tart - art imitating life.  People who attended the exhibition spontaneously started signing their names and writing their phone numbers on the door, in memory of Ivaan's habit of making notes of names and numbers on the wall by his telephone.  The door, absolutely covered with signatures, messages and phone numbers,  with his jeans still hanging from the hook, is now on display in our home.

I am so lucky that our friends Stefan Genyk-Berezowsky, Igor Korpan and Franko Diakowsky were kind enough to take video footage and extensive photographic coverage of this outstanding exhibition.  One of my greatest pleasures is to look at the photos, watch the film footage, and be reminded of this memorable occasion.   My gratitude to everyone who created, recorded, assisted with and attended this exhibition knows no bounds.
Posted by Eya at 6:51 PM