Anita worked in the art department of an advertising agency in the mid-1980s when she was first introduced to Ivaan by mutual friends who thought she'd be interested in seeing his work.  She later said that finding his work was like finding a piece of herself, so powerful was her connection to his art.

Now and again, Ivaan would drop by the ad agency with his latest creations all jumbled up in a plastic shopping bag, and just tip the contents of the bag onto her desk.

Anita was particularly in love with bracelets; she commissioned three magnificent specimens, each a "one-off", meaning no mould would be made of them.  Anita has incredibly slender wrists, so these bracelets are tiny.

Much has changed in Anita's life since the 1980s:  after her daughter was born, she moved out of the highly stressful world of advertising and started a home-based business, Anita's Kitchen, where she makes cookies.  What hasn't changed is her love of Ivaan's work.  She drops round every so often to look at the treasures I've discovered among Ivaan's vintage moulds.  I think she secretly misses the days when Ivaan would drop by her office unannounced and empty a plastic bag full of gorgeous stuff on her desk.

Anyway,  here are Anita's bracelets.   Later on I'll post a photo of Anita's new ring.  (Later on, meaning, when I finish it.)  It's a beauty. 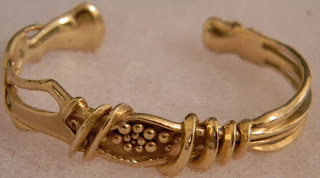 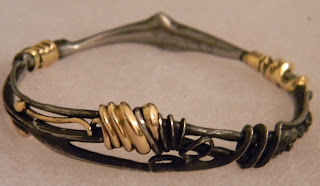 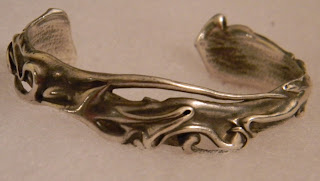