Today is the one-month anniversary of my having 'bought the farm'.

So far, it's been brilliant.  I could blather on forever about the fresh air, the delicious, clean well water, the silence and the utter darkness at night.
But frankly, I'm too busy learning the many new things I'll need to know, not merely to survive here, but to thrive.

I vowed before I came here that I'd approach this new chapter of my life with humility.  I'm not aware of having much big city attitude, but after half a century in downtown Toronto, I've probably got my share.  So, rule #1:  none of the baggage I came with will necessarily serve me well. This includes all my beautiful leather boots. Rule #2:  ask, nicely, for advice or recommendations, and if it's not immediately forthcoming, let it go.  No one owes you anything. Rule #3: if you come here looking to pay other people to do stuff you ought to know how to do yourself, you might as well have stayed in Toronto.

The first night here, I almost froze to death.  I arrived the day before my furniture arrived, but I had brought a chaise longue from my roof garden, and several wool blankets.  I didn't know how to operate the propane fireplace, so I slept in my clothes in front of the fireplace, just in case it took pity on me and magically started working during the night.  I had no phone and no internet, and boy, was it dark, but I survived and the hot shower I took the next morning made me feel human again.

Two of my nephews pretty much saved me on Day One.  Ivor, from his nice warm townhouse in Ottawa, hacked into my email for me (we're close that way) contacted the former owner, and between them, they figured out how to get my landline up and running. Angus and his partner, Sara, drove up from Toronto and while Angus installed some new phone jacks, Sara started wiping out the kitchen cupboards so I could unpack my dishes.  When the movers arrived, I was delighted to see how good my furniture looked and fit here.  It was as though I had chosen it precisely for this house.  See what I mean? 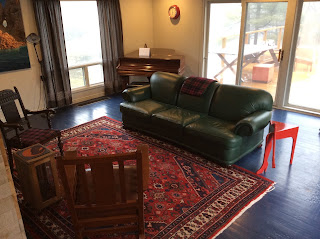 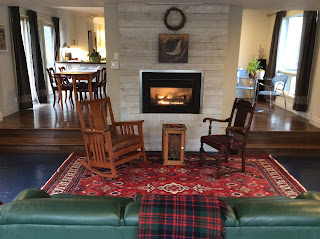 One of the oddities of this house is that there are two basements: the "old" basement and the "new" basement.  The old basement is the finished basement, and the new basement is the one with the concrete floor.  It also has the steepest staircase in the world.  It's like descending a cliff. Angus took one look at it and installed a landline at the bottom of the stairs, on the assumption that I'd eventually fall down those stairs, break a leg and need to call 911 for help.

Everyone who knew I was moving to a large house told me the same thing:  you need to buy a lot more furniture. I'm pleased to say, I didn't. Yes, I bought a huge green leather sofa before I moved here, and it has turned out to be very useful.  Although I inherited some furniture and art with the house, I've opted to sell most of it, so the net furniture I've acquired is a gate leg table, two small armchairs, two nesting coffee tables, an architect's desk, some bookcases and a twin bed frame.

My good friend Natalka Husar gave me my choice of one of her sketches, framed, for my dining room.


Some paintings came with the house and I have come to like all of them, one very much indeed.

Perhaps the best thing that came with the house is a rowboat.  I've named her the good ship Louise.  She totally looks like a Louise.  I've been out sailing on the ponds twice, and I love it, though family members have pointed out that a black leather motorcycle jacket is not a life preserver.

Clothing-wise, I've acquired a  pair of work jeans, work gloves, a plaid flannel shirt, and some knee length rubber boots.  I am a bit worried that my feet are going to take on the size and shape of those rubber boots, because they're all I've worn since I bought them.  I'm hoping to find an Amish men's straw hat.  Yesterday in the tool department of a hardware store in Georgetown, one of the older guys who works there called me "Sir". I took it as a compliment.  So...none of those finky women's straw hats for me.

Three days ago, I had my first bonfire in the fire pit.  Before you can have bonfires, you have to get a Burn Permit from the municipality.  There are rules to follow, including that you cannot burn things when the winds are over 10 km/hr.   I have a Burn Permit.  And I had a mountain of twigs.  So my bonfire was burning nicely and I leaned over to add some twigs to the top of the pile.  The breeze suddenly shifted, and just as suddenly I smelled that distinctive odour of burning hair.  If you've ever smelled it, it's not something you forget.  My hair is generally short, with a long lock on top.   At least it was.  I clapped my hands on my head but the damage was already done.  I didn't bother going inside to look in a mirror.    That night, I had a long, hot shower, applied an entire vat of conditioner, and I have to say, my accidental hairstyle looks pretty good.  Especially that black streak where the long lock used to be.