It's seven weeks now since I moved out of Toronto and I can hardly begin to count the things I've learned.

When I look back, I can see signs as far back as two years ago that change was looming.  One day, I was lunching with friends at Colette Grand Cafe, very close to our old house on Portland Street. We were appropriately dressed for a genteel urban lunch.  Leaving the restaurant with one of my friends, I asked if she'd mind a detour to Lee Valley Tools, conveniently located five minutes away.

If there's anyone on earth who objects to a detour to Lee Valley Tools, I don't want to meet them because there's no way that person and I could ever be friends.   If you're a friend of mine and you want to break up with me in the cleanest, most surgical way, just say "I don't want to go to Lee Valley with you".  You'll never see or hear from me again.

But on this occasion two years ago, my particular reason for visiting Lee Valley was because I'd been wanting an axe of my own.  A splitting axe, in particular. Also known as a maul.  One of the things I wanted to learn was to become a proficient, nay, elegant splitter of wood.

And that's when I bought my Ochsenkopf.  It's a German word, meaning oxen head, and that's generally the shape of a maul.  Its purpose is to drive a thick wedge along the grain of dry wood so it splits in two for easy burning.  Strictly speaking, I don't have the arms for such a heavy axe.  I'm really strong, but my elbow joints and wrists are the weak links in the chain.  I should have bought a lighter weight axe, but I loathe things that are specifically designed for women's use.  And somehow that Ochsenkopf really spoke to me. 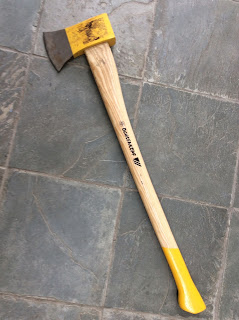 When I got it home, I immediately started looking for things to chop, which led to the discovery that my Ochsenkopf did not actually come pre-sharpened.  There was a hardware store across the street from Atelier Ivaan, so I went across to buy a sharpening stone.

If you're female, you've probably been mansplained a few thousand times in your life.  Usually the predominantly male sales staff at New Canadians Lumber, the hardware store, know not to make assumptions about me, but this day I happened across a newer staff member who decided to give me a lecture on  sharpening axes. I'm pretty sure he'd never sharpened anything in his life, because when he got to the "No, no, no, you don't want that to be sharp.  That's dangerous, eh?" stage, my patience ran right out.  I looked at him hard, and shot back, "When it's not sharp, we call it a club....eh?"

Once the Ochsenkopf was good and sharp, there was no stopping me.  Last May - May 5, 2018 to be precise - there was a huge windstorm in Toronto which felled a gigantic old tree and the fence of a local schoolyard.  The minute news went out of a downed tree in the neighbourhood, the Ochsenkopf and I were on the scene, practising our moves.  You can't do this for too long, though, because even a grey-haired woman of a certain age looks mighty suspicious wielding an axe in downtown Toronto.  And let's face it:  splitting wood is more exhausting than watching YouTube videos of people splitting wood.

I learned some pretty good skills, the best among them being:  don't bother trying to split wood that is still damp.  You'll be resharpening the old Ochsenkopf every five minutes.  Plus you'll look like you don't know what you're doing.

But out here in the back of beyond, I have infinite scope for my need to chop things.  Just this morning, I felled two deceased cedar trees.  I was kind of hoping someone would come along and watch, but I chopped in solitude.  I'll throw those cedars on the fire pit once they've dried out a bit more.

Then people can come by and be impressed by my fire building skills, which are next on the agenda.