It started with a table: a large black oak dining table from the early to mid-1800s that had been in our family house since the 1970s.  When we sold the family house, commonly known as 84, in 2016, our brother-in-law Gary had asked if he could have the table for his vacation home near Collingwood.  He was quite sentimental about it. 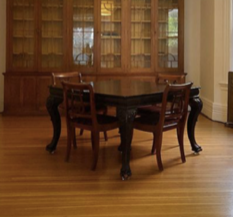 It's a table with a long and interesting provenance, having come from the home of the great-niece of a famous psychiatrist, writer and mystic, Dr. Richard Maurice Bucke, whose life and work was immortalized in the film Beautiful Dreamers, starring Colm Feore.  The American poet Walt Whitman had dined at that table on more than one occasion. Mrs. Seaborn, the great-niece, had inherited the table and some other furniture from her great uncle, and sometime in the 1970s our father, who idolized Dr. Bucke, was able to buy these pieces from her.

It took four of us to load the table into the back of Gary's pickup truck. Two years later, Gary had changed his mind about the table. Bringing it here to swallow up ATELIER IVAAN made no sense.  I offered it to the new owners of 84, but they were in the middle of a reno and the timing was not right, though they loved it, and subsequently regretted not having jumped at the chance.

So I started emailing around: who between Collingwood and Toronto would like, appreciate and respect a large black oak table with so many leaves that you could re-enact The Last Supper at it if necessary?  A woman I know about half way between these two points offered to take it.  She lives on a farm.  Gary said he would drop it off at her place.  It was a very rainy early summer and taking a huge table in the back of a  pickup truck in the rain was not a wise decision.  But Gary needed it moved, rain or shine. Sometimes the shortest distance between two points is to do it yourself.

So I rented a large cargo van, recruited my nephew Philippe to help me, and we headed north to Gary's.  We loaded the table in the van and headed south toward Sandra's farm.  I drove, Philippe navigated, and part way there I said to Philippe, "I can breathe out here".  I realized the asthma which often beset me in the city was completely absent.  I felt uncommonly well (although part of that might be attributed to spending a day in the country with an exceedingly handsome and charming 20-something nephew).

En route to the farm, we passed several rural properties that were for sale and I started wondering what it would be like to breathe freely all the time. I was beginning to feel like one of the people the Statue of Liberty spoke of - those "huddled masses yearning to breathe free".  I started fantasizing about finding a manageable rural property within an hour of Toronto.  First I envisioned moving ATELIER IVAAN to the country, so I looked for places that were zoned commercial. 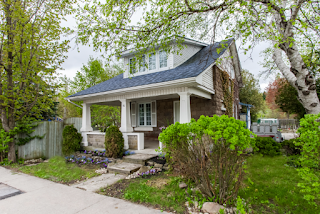 The first one that caught my eye was in the Town of Erin.  The house reminded me of another house where I'd lived in my early 20s, but this property in Erin has a 10 foot waterfall in the back yard.  It was on the main street and it was overpriced and neglected, but I was intrigued.  It took me a month or so to rule it out.

I started to think I'd like more acreage, with lots of trees on the property, and I found a 49 acre rural property southeast of Erin.  It had been on the market for some time and had just sold conditionally,  but the agent for that place alerted my agent to another place he had for sale: five acres just south of Erin.  I went to see it. 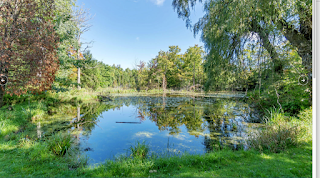 I loved the land but was daunted by the scale of the house.  It seemed massive. But the property had three ponds, a boat, a swimming pool, loads of trees, and so many amenities that I kept on coming back to see it.  In January I made an offer which was accepted. 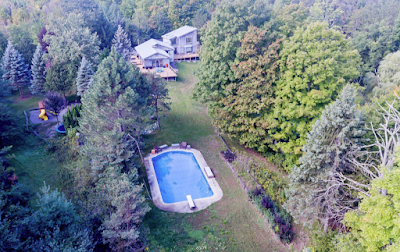 I'm two days away from moving.  I've named my property "5 Acres".  I've come to really like the young family who sold it to me.  I have a lot to learn from them about rural living.  I'd better learn it fast, because they are moving to Australia.  But as far as I'm concerned,  "5 Acres" will always be their home too.  They've entrusted a remarkable legacy to me and I mean to do my utmost to be a good steward of the land, to use and enjoy it every day, and in particular to come to the country with humility: not one of those city slickers who thinks they know everything and who lives like a country squire.

I do want to get a plaid flannel shirt, though, but I won't be wearing it ironically.  I'm here to learn.  I'm well aware I'm moving on April Fools' Day.
Posted by Eya at 8:00 AM