February 3rd was a momentous day.  It's the birthday of my brother Dave, the birthday of my nephew Samuel, and the birthday of my Auntie Eleanor.  It was also a good day for a road trip.  At lunchtime I went out for a drive with our longtime friend Myron, who is also my go-to guy for everything real estate. We'd decided to go out and see a very old (1871) schoolhouse which was newly up for sale in a hamlet about an hour's drive northwest of here.  I liked it because it had a beautiful brick exterior, very high ceilings and huge windows. 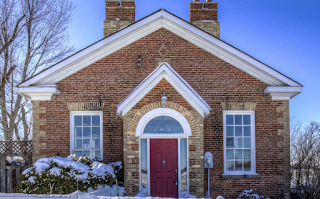 I've never been drawn to anything ordinary in the way of real estate, and it's no exaggeration to say Myron has hated every single property I've bought in the past.  He likes things conventional, comfortable, neutral in colour, well-appointed and moderately luxurious.  Over the years, he's learned not to roll his eyes when I drag him out to see something that's for sale.  He saves his eye-rolling for my taste in light fixtures.  He likes pleasant and unobtrusive. I like sculptural and industrial.

I knew the schoolhouse was going to have some drawbacks. I could tell from the photos that the land around it was pretty flat and uninteresting. But it was moderately enough priced that you could throw a hundred thousand at it, the interior would be transformed, and it would be a showstopper that you could resell in a heartbeat. 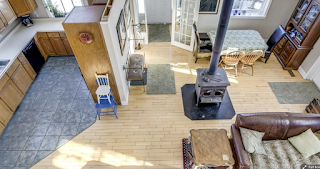 Even better, it had a massive workshop in the back corner of the property, with a loft. 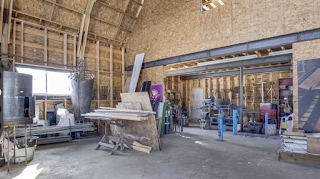 A schoolhouse makes an untraditional home, and I would have been very tempted, but for a feature that you couldn't tell until you saw it in person: it sat so close to the road that - as a friend said - someone could hand you your groceries from a passing car and you wouldn't even need to step off the front porch.  So, with some regret (me) and some relief (Myron) we headed back to Toronto.  As we were driving, his car phone rang.  It was a real estate agent whose client was interested in making an offer on my building.  I was so busy thinking about the schoolhouse, I completely zoned out.

But by the time we were close to my place, Myron asked "Can you live with" -- and he named a sum of money.  I gulped, decided to say yes, and the rest was history.  On April 1st, my wedding anniversary, my sweet little Atelier Ivaan will become the home of a naturopathic office and wellness clinic for mothers and babies, owned by two young women who live in the neighbourhood.

I had told my next door neighbours that I would do my best to find a buyer who would be an asset to the neighbourhood and who wouldn't be in competition with their longstanding restaurant businesses.   I thought it might become a hair salon or an architect's office.  But I don't think I could have predicted anything as excellent as this.

All of which begs the question:  where will I be moving on April 1st?  For months, I've had my eye on an out of town property.  It is way too big for me: too much land, too much house, too many bedrooms, too many bathrooms, too many basements (no joke).  It has too many ponds (three), too many trees (hundreds), and too many swimming pools (one).  But all my adult life I've been purposefully opting for small and urban.  Now I'm going to try the exact opposite.  Stay tuned for my next post, which will be called, appropriately, April Fools.
Posted by Eya at 10:17 PM