If you've read this blog far back, you'll remember the name Danny Izzárd. Danny and Ivaan were young men-about-town in the Yonge and Wellesley area of Toronto, where they were neighbours in the 1970s.  Over the years, they drifted apart and then back into each other's orbit, over and over again.  They were artists in different fields.  I suspect that too much proximity didn't serve either of them well.  One was always up when the other was down, and then the pendulum would swing the other way.  But they enjoyed each other's company on and off, and perhaps Danny, who was by far the more overtly emotional of the two, taught Ivaan by example that it was possible to express one's emotions with high drama, with tears, with loud voices, even, and not....fall apart.

This was an expression that Ivaan hated: fall apart. His sister, whom he loved dearly, used that expression frequently, and Ivaan would immediately start teasing her.  Nadia lost a favourite earring at a movie theatre?  "I completely fell apart!" she'd tell him.  And Ivaan would rejoinder: "Did they have to sweep you up?"

There were quite a few occasions over the years when Danny "fell apart", and I was invariably touched to see how immediately Ivaan reached out to help his friend, something that didn't exactly come naturally to Ivaan.  Once, when Danny was at the end of a long and stormy relationship, Ivaan received a phone call from the young woman to say Danny had disappeared.  Without a word, Ivaan got in the car and drove to every possible place he could imagine Danny going in distress, searching for him.

Another time, Danny had bought a really excellent building which contained his art studio.  Unfortunately, the owners of the property next door decided to open a laundromat.  The smell of scented laundry products made it intolerable for Danny to work there.  Impulsively, Danny put his building up for sale. Naturally someone bought it immediately.  It was harder than he imagined to find another building to buy, and Danny regretted having sold his building, but the new owner did not want to release him from the sale.

I dropped by one day to help out by moving some of Danny's possessions temporarily to our house, and found Danny at the dining room table in floods of tears. I pretty much ran out the door, drove home, picked up Ivaan, who directed me to Vinny's Panini, where we picked up some hot meatball sandwiches for him and Danny.  The two of them just sat there at Danny's dining room table in silence (with the odd snuffling sound from Danny) and ate their sandwiches.  By the time they'd finished, Danny seemed to feel better and we finished packing up the car.

Danny eventually met the woman who was to become his lifelong partner.  She was so different from Danny, but she wasn't in competition with him.  She seemed to draw out his strengths while being able to work around his moody side.  She was practical, and she was less concerned with material things than Danny.  Best of all, she truly loved him just as he was.  When Danny was anguishing about finding a new house to buy, I remember her looking at him and saying, "I would live with you in a tent", and she meant it.

Danny phoned us one day and invited us to come over to a party at their house on Christmas Eve.  I said we were busy, as we had family visiting.  Danny replied, "Oh, because I was planning on proposing to M that night" (his beloved).  My first thought was, "Wait.  We are jewellers.  What on earth is he proposing with, if not a ring from us?"  So I told Danny we'd be there, but if he didn't come right over and choose some rings, there would be trouble. Luckily I knew M's ring size, Danny knew what she liked, so Danny came right over and we got that sorted in a hurry. Two wedding rings and an engagement ring became our wedding present to them.

So they got married, were very happy,  and it seemed like things had worked out so well for Danny.

Recently, Danny became ill and in a matter of months, his life was over.   He was 69.  He left an impressive body of work, mostly in the form of large oil paintings, as well as his wife, his son, and a grandson.  I just wanted to post something in tribute to Danny.  Here's a photograph of him, a man about town, on one of his painting expeditions in Europe.  It's probably exactly how he'd like to have been remembered. 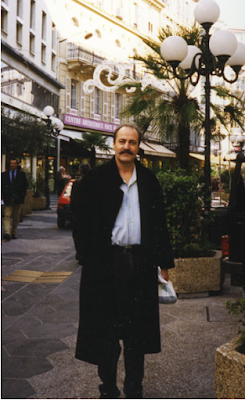