This afternoon I'm heading over to Alvéole, the beekeeping company who have taught me most of what I know about honeybees, to extract the honey from my frames and bring it home in a pail.  I've opted to leave a fair amount of honey on the frames that still remain on my roof deck, to support the bees over the winter, plus I am planning to add a whole lot of syrup, because the hive and the bees are going to over-winter on the roof, carefully insulated against the cold, and I'm hoping the winter won't be too harsh, because I don't go onto the roof during winter and I won't easily be able to check on them.

Here are a couple of photos of my frames of bees. 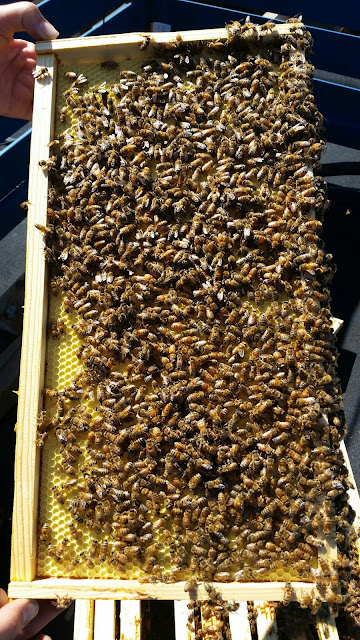 So I'll participate in my extraction, bring home my pail of honey, and start figuring out how to get it into little jars without the entire kitchen turning into one sticky mess.

I've always considered myself the most urban person, but in the last two summers I have grown potatoes, garlic, ginger, Welsh onions, leeks, basil, rosemary, tomatoes, snow peas, arugula, rhubarb, but most of all what I have grown is my brain and my powers of observation.  This isn't much of an accomplishment compared to people who farm and grow things for a living, but it's going to have to sustain me for the long winter ahead.  Traditionally, I don't do well in winter.  I don't like the cold, hate sports, and though I have lots of scope for snow shovelling, because I have plenty of neighbours in addition to a wide sidewalk of my own, nothing really tempts me to want to go outside between January and April.  I'm a lot like the bees in that respect: warm weather has me hanging out at the front door or on the roof or doing things around town.  Cold weather has me hunkered down inside wondering if anyone is going to visit me, and if so, will they do it on a day when I don't have to wash the road salt off the floors?

I will post more photos of my actual honey and the extraction process later on today. 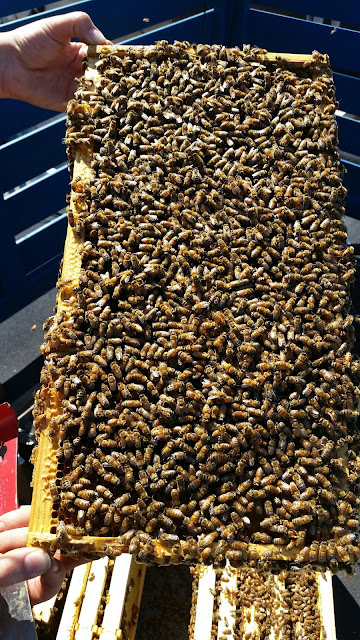 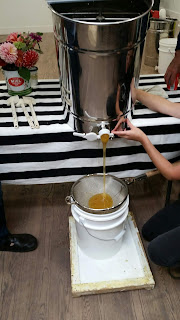 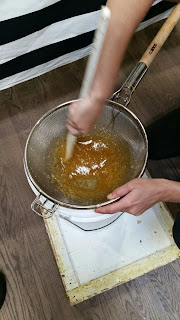