TINA AND HER BEACH EMERALD RING

One of the strange things about running Atelier Ivaan is not always knowing what happens to a piece of jewellery after it has been purchased.  It's wonderful when someone who has bought a ring bursts through the door a few days later, beaming, and announces, "She said YES!"  But many times the item gets boxed and bagged up, and I never hear another word.  I have to assume, on those instances, that the gift (if it was a gift) was a complete success.

Social media plays a significant role in Atelier Ivaan.  I've met many people through social media who come to be friends once I eventually meet them in person.  It's not surprising: we get the formalities out of the way before ever actually meeting, know we're going to enjoy each other's company, and meeting is almost a foregone conclusion.

Recently, I got to know two sisters through social media.  Both are beautiful, very accomplished women; both are charming with a great sense of humour. They also share a very strong bond.  Their names are Tina and Michelle.

A funny quip by Michelle on Twitter led to a plan to meet for lunch in Toronto. I invited them to come to Atelier Ivaan for lunch and they accepted. Now, the average person might find it a bit awkward to be having lunch in a store owned by a stranger.  Luckily, neither of these sisters is average in any way.

So on the appointed Tuesday, Tina and Michelle showed up for lunch. Michelle is an actor, and we knew in advance that our lunch plans could be derailed at the last minute because she might be called to an audition.  But we were lucky. Michelle arrived with a bouquet of flowers, and Tina, who is an author, arrived with a selection of several of her books.

We talked non-stop through lunch, and then Tina was curious to see what was in the showcases.  Almost instantly, her eye was drawn to the Beach Emerald ring, which is featured in my book, 30 Pieces of Silver.  Incredibly, it fit her ring finger.  You could just see that it reminded her of something.  Finally, she asked me, "How much is this ring?" I laughed and explained that the store wasn't open on Tuesdays, so it wasn't actually for sale that day.

After the sisters left, I found myself immersed in one of Tina's books, Picnic in Pisticci.  It was a delightful book about a series of picnics she'd been on throughout her life and what they meant to her, ending with a picnic in her father's ancestral village in Italy.

While I was enjoying rereading it over the next few days, particularly one chapter about she and her husband being committed "beach people",  I received a message from Tina, asking if we could talk about the Beach Emerald Ring. She just felt that it was meant to be on her finger.  I tried to persuade her that maybe her husband would not be impressed by such an unusual piece of jewellery on her finger.  "Oh, no", she replied, "He completely gets me.  He knows my taste."  She was more worried that I would feel bereft by giving up the ring.

It's odd, but as long as I know a special piece of Ivaan's jewellery is in the right place - even if that is not in my possession - I feel completely at peace with no longer owning it.  And so that's how Tina came to own the Beach Emerald Ring.

I asked her how she felt about writing a Love Story for my website about the ring (because after all she's a writer!) and this is what she wrote:

And now, here's a photo of Tina's Beach Emerald Ring.  Reading her Love Story, I understood right away why she got that look on her face when she first tried it on.  The Beach Emerald is exactly where it was meant to be. 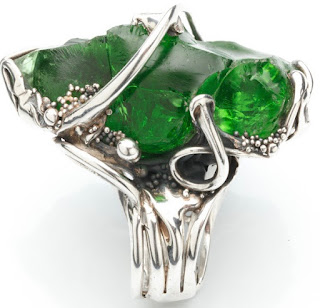