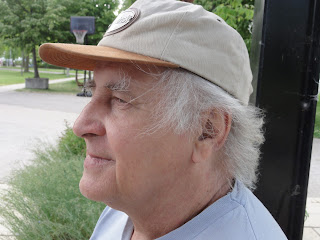 Ronnie Chlebak has been a friend of Ivaan's since they were neighbours back in the 1970s.  Ron ran a company, Pure Sound, that made stereophonic speakers, in a warehouse on St. Nicholas Street, and Ivaan's Yonge Street home and studio backed onto St. Nicholas Street.  I first met Ronnie in about 1984, around the time his son Nathan was born.

Ronnie was a pretty laid-back guy with a million friends and acquaintances, but he was the type of loyal, reliable friend who could always be counted on to lend a hand when anyone he knew was in need of some help.  Often that help involved moving people's possessions.  Ron had a pick-up truck and a ragtag crew of helpers, often young people he was mentoring.  He was humorous, kind and very non-judgmental.  In fact, I never heard Ronnie say a bad word about anyone.  He just accepted people as they were, however complex their lives and personalities were, and helped them when he could.

In fact, he was busy helping a friend right up until the end of his life.  He'd gone up to the Muskoka area to help his friend Joe, who lived up there, and, as I have heard the story, was doing some hard physical labour out of doors. Perhaps he had gone to the river to splash some cold water on his
face, but when his friend returned, Ronnie had died of drowning.  He had just celebrated his 70th birthday.

Last Tuesday I attended his wake.  The place was absolutely loaded with food and packed with the people who had brought it, all friends, from all walks of life, many of whom had known him for decades.  Some people went up to the microphone to speak about Ronnie: how they had come to know him, funny stories about him, heartwarming stories about the kind deeds they will remember about him.   I spoke about the first time I met him, about how recently I had seen him, because he always came by the shop on his bicycle to check up on me and make sure I was okay, ever since Ivaan's death. The last time he'd come by, about a month ago, he was looking terrific:  all dressed up in freshly-laundered clothes, hair trimmed, looking better than I'd seen him in years.

I was particularly glad that I'd dropped by his house one evening a couple of months ago, to give him an inscribed copy of my book, 30 Pieces of Silver.  He had not shown up at the book launch, perhaps fearing that it would be too much of a dress-up occasion for his habitually casual  sartorial standards.

Ron was, as usual, grumbling about the incursions of old age, and making vague promises about starting to eat healthy food and to get his affairs in order.  And then our talk turned, as it inevitably did, to his son Nathan. Ronnie marvelled that he had produced such a tall, handsome, sweet, creative, capable, clever, charming son.  Nobody else marvelled at that.  Ron himself had many gifts, but his love and devotion for Nathan was foremost in everything he said and did.  What other kind of son would Ron have had?

Tears spring to my eyes every time I realize I will never see his unlocked bicycle leaning against my store window again.  Thank you for being such a good and loyal friend, Ronnie. I will really miss you.