THE KEY TO HER HEART

If you've been reading the blog for a while, you may remember the story of Nik and Connie and the very unusual ring by Ivaan that  they bought  in an antique store in Cambridge, Ontario. Connie did a bit of research on the ring and managed to locate me. She emailed me to tell me about her find, and I arranged to have her send me the ring so that I could do some work on it and return it to its former  glory.

It was very exciting getting to meet them and their beautiful daughter, Lola. when they came to pick up the newly restored ring. Nik and Connie own a vintage clothing and accessories store in Hamilton, Ontario, called Vintage Soul Geek. I immediately liked all of them very much.

While they were visiting me, they had a chance to poke around in our display cases, and Connie was particularly taken with a sterling silver one-of-one bracelet by Ivaan. It's a remarkable bracelet.  And I confess it's a bracelet I often worry about, because it's so unusual I wouldn't want it to fall into the wrong hands. Here's a picture. 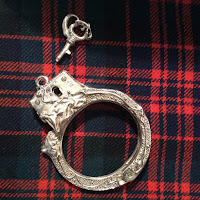 It requires a key to unlock the bracelet which, as you can see, is one side of a handcuff. If the wrong person wore the bracelet and lost the key, they might panic and be tempted to destroy the bracelet in an attempt to get out of it.

Recently I received a message from Nik asking me if I still had the bracelet and if there was any way I would consider parting with it. He said that Connie was so enamoured of the bracelet, she mentioned it probably once a week.  As it turned out, Connie's birthday falls at the end of September, and Nik was hoping to surprise her with the handcuff bracelet.

I suddenly realized that this is exactly where the handcufff bracelet was meant to be all along, but I explained to Nik that I would be anxious if they took it with only one key. I asked if he could wait long enough for me to make a duplicate key,  in order to ensure that there was one on standby just in case the original ever got lost. Luckily, that seemed eminently sensible to Nik as well, and last week I cast a spare key.

This evening  I polished the handcuff bracelet for the very last time, because Nik, Connie and Lola are coming to pick it up on Sunday. I'm thinking of putting the duplicate key on a leather cord that Nik can wear around his neck just in case of emergency.  He already knows he has the key to her heart, but an extra one, just for insurance, will never go amiss. 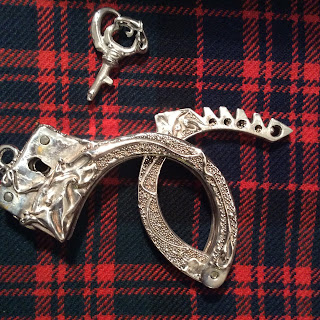 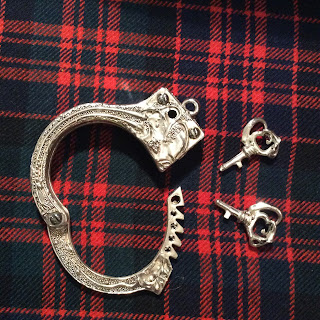