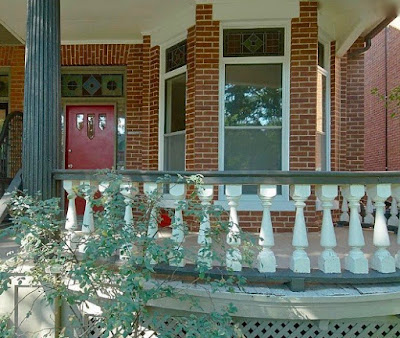 For as long as our family has lived there, it's been known only by its street number: 84.

Our parents bought the house on July 14, 1966 and for the first year it was rented to university students, while we were living in London, England. We arrived in Canada by ocean liner a year later, sailing up the St. Lawrence to the Port of Montreal, passing Expo 67 in full swing. It was evening when we arrived at Union Station: our mother, five children ranging in age from 7 to 15, an uncle, an aunt and two cousins. Our father had remained in London to finish up some research.

I definitely did not want to come to Canada. I loved my school in London, loved my friends and classmates, and beseeched my parents to let me stay behind.  I think our father would have caved, but our mother insisted I come with the rest of the family to Toronto.  London in 1967 was fun. It was exciting. I had never felt as comfortable and alive as I did in London. By contrast, Toronto was staid, provincial and boring.

In London, we wore school uniforms.  As a result, our weekend clothes tended to be much more stylish.  Starting school in Toronto, my wardrobe consisted of the weekend clothes I wore in London.  Clothes from Carnaby Street, Oxford Circus, Selfridges.  Eye popping colours, shorter skirts than any worn in Toronto, bright leather shoes.  I quickly got used to heads turning in the hallways of the local high school. Anything from England was considered cool that year, and I had an English accent which, combined with my clothes, made me stand out, even though I was a couple of years younger than most of my classmates. We also had a copy of The Beatles' Sergeant Pepper's Lonely Hearts Club Band, which had not yet been released in Canada.

But 84. We arrived at 84 to find a large, old, dark, grimy house without basic amenities like light bulbs. I remember my siblings and I trying to wash the walls of the kitchen that night, alarmed at the prospect of having to sleep in what looked like it might have been a haunted house. Next morning, in daylight, we were amazed to see that most of the house was wallpapered in an enormous pattern of olive green fig leaves over white brick.

I quickly claimed the larger attic bedroom for myself.  The rest of the summer was a blur, getting the house cleaned up enough to be habitable. And gradually we settled into what was to be our permanent family home.  I got a part time job, first at the library, then at the local bakery.  And that is where I was when I first met Ivaan two years later.

He came in one Thursday evening in December to buy some dill pickles and a small loaf of light rye bread. Zwei un' dreisig the bread cost, in Yiddish, because it was a Jewish bakery.  Thirty-two cents.  I was working alone in the bakery that evening,  and because it was slow, we began to chat.  He was a photographer, he had gone to my high school a decade earlier, and his family lived a few streets away from mine.  At 25, he seemed like an ancient geezer to me, but he was really interesting and I enjoyed talking to him.

Two days later,  I came home to a phone call from Ivaan.  He wanted to know if I would like to accompany him to the opening of an art exhibition.  I explained that this would necessitate him coming to the house to meet my father.  He seemed agreeable, and shortly thereafter he arrived at the front door.  He and my father retreated to the kitchen for a chat, while I stood in the living room for an inordinate length of time, wringing my hands.  Eventually I poked my head into the kitchen, and found the two of them so engrossed in conversation that they had completely forgotten about me.  Somehow, I secured permission to attend the art exhibition, and it was the start of a friendship with Ivaan that spanned decades.

Ivaan led a big, exciting life.  I was in high school. On the surface, it would be hard to imagine two more unlikely friends.  Years later, I learned that he had told his mother all about my family. My high school friends were impressed. When he learned I liked motorcycles, he gave me his old Harley Davidson.  He came in useful when I needed to scare off too-persistent boyfriends.  He once insisted on attending a high school dance with me, where he showed up reeking of patchouli oil, in full hippie regalia.  Looking back, I realize that Ivaan provided what I was missing when I left London: a bigger, brighter, more exciting life.

So, what does all this have to do with 84?  This month, we put 84 up for sale.  It no longer has the fig leaf wallpaper.  The neighbourhood has gentrified to the point where all the houses are protected by a heritage designation and the only people who can afford to buy a house there are the people who can afford to spend a couple of million.  One day later, the house was sold to a young couple with two boys the ages of my brothers when we first moved to 84.  Three weeks from now, it will be their family home.

We'll be leaving so much behind: the memory of our lovely niece being born there. The memory of our elder brother being married there.  The memory of our mother taking her last breath there.  The memory of the fig leaf wallpaper, some of which still remains on the walls of the upstairs cleaning closet.  I spent a month at 84 this summer, cleaning, repairing and painting it in preparation for the real estate market.  It reminded me of our first night there in 1967, trying to wash the kitchen walls - only this time with light bulbs in place.

But personally, what I'll remember most vividly is that I'm saying goodbye to the house where I waited impatiently in the living room in December of 1969 while my dad and Ivaan seemed to have been talking about everything under the sun except me.  The small rye bread Ivaan bought the evening I first met him at the Harbord Bakery now costs $3.95.

As for 84, I like to think I've honoured our family's years there by leaving it in better condition than I found it in, 50 years ago.  But as the American poet Robert Frost wrote, "Home is the place where, when you have to go there, they have to take you in."

I didn't think it would be bittersweet, but maybe it is after all.
Posted by Eya at 1:11 AM