In the late 1960s, Garth came to live in Toronto, part of the wave of young Americans whose opposition to the Vietnam War brought them to Canada. He was a talented photographer, and actually as soon as you meet Garth you realize he's someone who, in his quiet, unassuming way, is very good at quite a number of things.  Garth floated into Ivaan's orbit - and vice versa - and they shared a lifelong friendship that didn't require them to be in regular contact.

Garth was a family man right from the start.  Ivaan was the opposite.  When Garth met Victoria, his fate was pretty much sealed.  They quickly acquired a house and a houseful of children and Garth settled down to a rich, fulfilling family life.   All these years later, they still live in the same house.  Victoria is vivacious, distinctly pretty, with a quick sense of humour and a youthfulness that belies all their years of marriage.

And Garth? Garth is a happy man.

Last week, Garth called me with the news that their 40th wedding anniversary is fast approaching.  He'd been having a look on our website and hoped to surprise Victoria with a new wedding ring.  After all, she's lost one while gardening and lost its replacement while doing something else.  And the thing is this:  Victoria has lovely hands.  She felt the absence of a wedding ring keenly.

Garth and Victoria had planned a 40th anniversary cruise to Eastern Europe as their anniversary gift to each other, and they had agreed not to exchange gifts because really the cruise was their gift to each other.  But they were having a little family celebration in a couple of weeks, and he really wanted to present her with a new wedding ring, with rubies, because 40 years is the Ruby Anniversary.

He'd earmarked a few rings on our website, and he had sneaked a couple of her rings out of the house when he came by the atelier with a close friend of Victoria's in tow.   He wanted to ensure he chose the correct size.

So here's where the plot unravels.  I thought the rings he had earmarked were too heavy for an everyday ring.  Their friend agreed.  And I was fairly sure that the rings he'd brought were too large a size for her ring finger.  So we devised a plan.  I'd lend their friend a ring in a size seven-and-a-half, she'd show it to Victoria and pretend that she'd just found it in the street, and Victoria would no doubt try it on.  I deliberately chose one which Victoria would be unlikely to recognize as an Ivaan ring.

I showed Garth some rings that I thought Victoria would like.  Immediately he was taken with a double-Calla lily ring in white gold with two diamonds, but asked if he could have it with rubies instead.  I thought it was an inspired choice.  So off they went to try out their little ruse on Victoria.

Fast forward one hour.  Garth and Victoria walked into the atelier.  "The surprise is off" said Garth.  Apparently, Victoria immediately recognized the "found" ring as an Ivaan ring, realized that a little drama was unfolding in front of her eyes, and said to Garth, "If you're planning on getting me a new wedding ring, can I at least come and see it?"

So I showed Victoria the ring Garth had chosen.  She absolutely loved it.  It fit perfectly in a size 6, and it looked terrific on her elegant, beautifully manicured fingers. 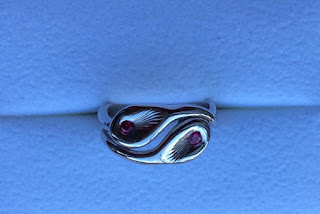 I made the identical ring in white gold with two beautiful rubies from Ivaan's collection.  Garth and Victoria came by today to pick it up.   She tried it on, then turned to give him a loving kiss.  My eyes welled up with tears and I had to bite my lip to compose myself.  Not just because the ring was perfect, but because for 40 years, Garth and Victoria have shared this enduring love.