I can hardly believe it's been four years since ATELIER IVAAN opened its doors on Dupont Street.  I've learned so much - about jewellery, about business, about people, about trust, about luck, and about stupidity - that I probably should be much older than I actually am.  At least I'm wiser.
There have been some high points, some low points, some very funny things that have happened along the way, some things I'd have done differently and some very poignant moments I've had the privilege of witnessing.

I bought this building on Valentine's Day 2012 from a woman who owns an interiors store called Pimlico Design Gallery. 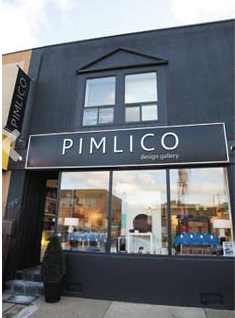 She and her husband had bought a larger building in the neighbourhood and were expanding her business.  I learned a lot from Tatiana about running a retail operation.  She was generous with advice and suggestions, and forthright enough to tell me frankly about things I needed to know, or to do differently.  I credit her enormously with getting me through the early days when I was a total imbecile.  I came to realize how gracious her help was, because in opening up a store in another artistic field, I was becoming in some ways a competitor.  She was definitely a mentor.

I also credit the Vice President of ATELIER IVAAN, my nephew Ivor, who has spent more holidays here than either of us can remember.  Inventory, I.T. support and persuading me to move from a POS terminal to another payment system are some of Ivor's improvements.  He has taken me out to dinner on so many occasions to talk things over, been my most trusted employee (I actually trust him far more than I trust myself) and been my confidant.  He has dragged me kicking and screaming into the 21st century.  Even now when he's away at university, he has carte blanche to make financial decisions for us both.

Everybody knows ATELIER IVAAN as "the store with the guy in the window".  I hear this all the time.  The "guy in the window" is an oil on canvas portrait of Ivaan by Daniel P. Izzard.  Sometimes I move the painting into the store so I too can enjoy looking at it.  Immediately, I get complaints from people who like to see it when they pass by.  So back it goes into the window.  I don't think Danny anticipated his painting would become a kind of landmark on Dupont Street, but I appreciate it every single day. 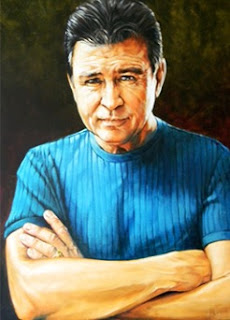 I have found myself among fantastic neighbours.  On both sides, I have restaurants owned by terrific people.  We look out for each other and I know if I ever need any help from Vinny's Panini or Universal Grill, I can count on them.  My next-door upstairs neighbour, Sam, saved my life one winter evening.  I was feeling unwell, had a bad headache and decided to sleep it off. Long story short: Sam had come home to an apartment filled with natural gas.  It took a few hours before a gas leak was discovered in the basement next door.  If I'd gone to sleep, I would not have woken up the next day.

I'm lucky that some of the funny things that have happened did not turn out badly.  Once, the summer after I opened, it was a very slow day and I decided I'd rather be having a pedicure than running a retail store.  So I got my purse, set the alarm, and headed to the nail salon in Yorkville.  Two hours later, I returned to find that the door was unlocked.  In my haste to leave, I'd forgotten to lock the door.  It's a testament to how slow it was that day: if anyone had come in, they'd have set off the burglar alarm.  But not a soul had come in.  It took me a while to calm down.

On another occasion, I'd gone to church on Sunday with my close friend Crystal and her children.  As we went into the church, my phone started ringing so I turned it off.  I could feel it buzzing all the way through the church service.  I ignored it....until on the way home I turned it on and learned the alarm company had been calling me for three hours.  Something had triggered the motion sensor in the store, and security personnel were stationed outside, but luckily nothing untoward had happened.

On another occasion, I was chatting to my friend Lesia on the phone when the store door opened and an older man walked in, with some clothing draped over his arm. He held up a pair of trousers and said he wanted them fixed.  I explained that we were a jewellery store and we did not take in mending. He pointed to the window and asked, "So why does it say "Alterations Ivaan" on the sign?" Lesia quipped, "Would it have killed you to hem his pants?"

Some of the very touching experiences I've had involved making engagement and wedding rings for clients.  It feels wonderful when a guy bursts through the door shouting, "She said yes!"  And on one memorable occasion I made lots of wedding rings for the mass wedding at Casa Loma which was an important part of Toronto's Pride celebrations. Being part of such an occasion felt very special.  "Pride" had extra meaning for me that year.

One evening, I was open late when a couple named Michael and Roxana stopped in on their way to dinner at Universal Grill.  That was their traditional "date night" restaurant.  Roxana was intrigued by our rings and tried on a few gold ones, until one in particular caught her eye. 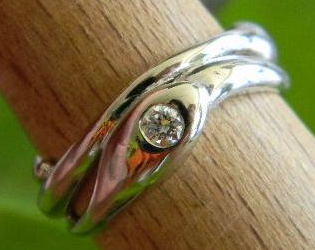 The "Wave" ring, as it's known, has three diamonds spaced evenly around the band.  They have three sons, she had just lost her original wedding ring, and this one fit her perfectly: one diamond for each son.  I suggested she take it next door and wear it during dinner to make certain she was comfortable with it,  But she was adamant this was intended to be her new wedding ring, and I think of the two of them every time I show someone a "Wave" ring.

I try not to dwell on the low points I've experienced, because they tend to suck all the joy out of the room: If I had to do it all over again, I think I'd have opted not to move into the unrenovated apartment upstairs to help out a friend who needed a place (mine)  to stay for a couple of months while in between residences.  No good deed goes unpunished! That spontaneous act of kindness set in motion a series of unpleasant events that have brought me grief ever since.  I learned a lot about trust and the peril of ignoring warning signs about people. I have mostly managed to retain my sense of optimism and my belief in the value of being a good person, in spite of how others behave.  The people we know don't always wish us well.

Four years ago, just after I opened the doors of ATELIER IVAAN, I travelled to Iceland with family.  Last month, in celebration of four years on Dupont Street, I returned to Iceland with a close friend.  Revisiting some of my favourite haunts, I felt quite nostalgic for the days four years ago when I didn't know what on earth I was doing, and I felt extraordinarily satisfied that four years later I had the wisdom to know that ATELIER IVAAN would survive even without me here at the helm, making new mistakes and new friends every day.