One of the best and most memorable vacations Ivaan and I ever took was to Italy in October 1999.  Ivaan had made wedding rings for our friends Leonardo and Jiřina.  They were being married in the ancestral town of Leonardo's family, and invited us to attend.  Ivaan was really excited.  I still have the photograph he took of us with our airline tickets when he brought them home from the travel agent. 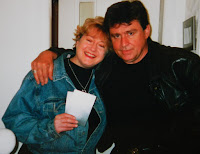 Leonardo's family hailed from Picinisco, in the city state of Frosinone, but they had emigrated to Edinburgh in the late 1800, and that's where Leonardo was born.  He had a heavy Scots accent, which made him seem all the more like family to me, and yet he had an Italian flair. Always attired in dapper fashion, he was the most charming man, witty, a gifted storyteller, and that talent served him well, because he had a fairly celebrated career in the film industry.

Jiřina, whom we originally met through our good friend Vladyana, was the love of his life.  She's one of the "Czech Chicks", a talented artist and a beautiful, gracious woman who also happens to love Ivaan's jewellery.  She and Len made a wonderful couple, and it was after a trip she made to Japan that Leonardo proposed to her.  I remember her telling me she was so tired after her trip that she couldn't absorb what he was saying, but once the jet lag wore off, she said yes, and they started to plan their wonderful wedding in Italy.

We arrived at Fiumicino airport outside Rome with only carry-on luggage, which included not just our wedding clothes but also our camera equipment, because Ivaan was going to be photographing the wedding. Travelling with Ivaan, I've learned to pack light. We picked up our rental car, a tiny Renault with manual five-speed transmission and headed south towards Atina, the town in which we were staying, just beside Picinisco.    It was hair-raising to be driving at 180 km per hour, just to keep up with the speed of traffic, and to be honked at and given hand gestures which suggested that I should be driving even faster.

When we arrived in Atina, we pulled up at the house where Leonardo and Jiřina were staying, and they came out to greet us.  First question from Jiřina: "Eya, you speak Italian, right?"  I conceded that I used to speak it reasonably well because I had studied it at university a quarter of a century ago.  They both sighed with relief:  "That's great, because we are being married by the Mayor; he doesn't speak English and we don't speak Italian.  So we need you to be the simultaneous interpreter from Italian to English."  Wow.

Luckily, I managed to get a printed copy of the wedding ceremony in advance, read it over and practised it a couple of times.   Now, that's the way to make someone feel welcome at your wedding:  have them make the rings, photograph it, and act as the interpreter as well.  I have always hoped that my interpretation was sufficiently skilled to make their marriage legal!

Anyway, it was a dream wedding, and a fantastic holiday.  We celebrated Ivaan's 55th birthday on a sleeper train from Napoli to Venezia, and we loved every moment of our trip.

Yesterday, I opened the newspaper and learned that Leonardo has died.  It seemed scarcely possible.  Almost immediately after,  I heard about it via email.  On Friday, our wedding party will reunite in Cobourg for his funeral.   I'm glad I have Ivaan's wonderful photos of our memorable trip to Italy - a time when we were all well, young, beautiful, happy and carefree enough to enjoy driving at 200 kilometres an hour.