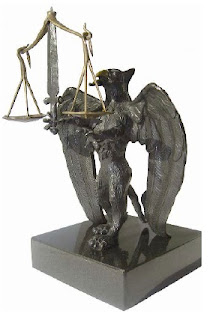 In 1996, The Advocates' Society approached Ivaan to discuss creating an original sculpture which would become their Award of Justice.
The Society already used as their symbol the gryphon, a mythical creature said to be the offspring of an eagle and a lion, which had a long tradition of symbolizing justice in English Common Law.

The Advocates' Society is a Toronto-based organization of Ontario trial lawyers and judges, the roots of which go back to 1965. Its membership includes the most famous and remarkable legal minds in Canada.  Ivaan was thrilled at the prospect of creating a sculpture for them.

The Award of Justice was intended as an award which would be presented biennially to a lawyer who had distinguished himself or herself by taking on a legal case which would have been considered unpopular or unwinnable, either because of the nature of the case or the disfavour in which the public might have held the person accused - in other words, a case which could have damaged the career of any barrister who took it on.  So a lawyer who might be worthy of an award like this would be someone who believed that an unpopular accused's right to a fair trial and excellent legal representation outweighed any potential harm that might be done to the reputation of the individual defending such an accused.

Ivaan's gryphon sculpture project began with him looking at other examples of how gryphons had been depicted throughout history and in art.  Not satisfied with what he saw, he set out to create a realistic looking sculpture of a gryphon - not easy, because no one had ever seen one.   He carved his vision in a hard, sticky type of wax, which was incredibly difficult and labour intensive.  Sometimes he'd bring it home from his studio and work on it at the kitchen table after dinner.  I used to tease him that it looked like a squirrel that had fallen into a vat of tar.  He nicknamed it Froggie, for some reason, but as Froggie took shape, it was clear that this was going to be one of Ivaan's most remarkable works of art.   We had endless discussions about the nose, or beak, and Ivaan always claimed that he had modelled it on the handsome and prominent proboscis of Mr. Justice Charles Dubin.  Although Ivaan hated the idea of anyone interfering in his art, he eventually recruited me to cut out some of the feathers to apply to the upper torso of Froggie.

In a playful moment, Ivaan carved a heart on Froggie's chest, right where a human heart would be, and inside the heart, he carved the word MOM.  He then covered the heart "tattoo" with a feather, and explained to me that behind every fine lawyer who was destined to receive this award was a mother who deserved some recognition for her support and encouragement.

When Froggie was finished, he held aloft a sword, on the tip of which was unevenly balanced a set of weigh scales, representing a legal case which was so tipped against the accused as to be unwinnable.

Froggie, or The Award of Justice, as he was now known, was first presented in 1997, coincidentally by Mr. Justice Charles Dubin, whose nose had served as a model for the sculpture.  It is not the most prestigious award The Advocates' Society presents.  That honour would fall to The Advocates' Society Medal.   But Ivaan attended every presentation of The Award of Justice, until his death, and never failed to point out to the recipient's mother exactly where the MOM heart tattoo was located, and what it meant.  I often think of the individuals who have received The Award of Justice to date: Raj Anand, Jeffery Wilson, Barbara Jackman, David Lepofsky, Jacquie Chic, Susan Vella and Lawrence Greenspon, and how they must marvel at this gothic creature watching over their legal career.
Posted by Eya at 8:24 AM