PRANKED AGAIN: The Week We Got Stairs

Our house on Portland Street was built in 1855.   It was an incredibly vertical house: three storeys,  high ceilings, a very small footprint - from the outside, it looked exactly like a shoebox tipped up on end.    But after 140 years, the stair treads between the first and second floors were worn with deep grooves left by the feet of all the generations of occupants who had climbed the stairs over the years.  I decided it was time to replace the staircase.

My paternal great grandfather, Barnett Levy, had been a staircase carpenter back in east end London at the beginning of the 20th century, and during the Week of the Staircase, I sincerely regretted never having met him.    However, a friend introduced us to a woodworking company who introduced us to a stair carpenter, and - at least in theory - our staircase replacement project was in progress.

As a cost-saving measure, we'd agreed to remove the original staircase just before the new stairs arrived.  On Sunday, when the stair carpenter called to say the new staircase would be installed the next day, I rented a long ladder, got my toolbox, and prepared to wield my crowbar and sledgehammer. Just before the first hammer blow, Ivaan spoke up:  "Take care when you're removing those stair treads", he cautioned.  "I know people who are paying fifty dollars each for worn stair treads in good condition."

With all the precision of a surgeon, I removed the treads without damaging a single one.  It took a really long time.  From the second floor landing,  Ivaan supervised.  By the time I had fourteen of them piled on the floor next to me, Ivaan could contain his laughter no longer.  "I can't believe you fell for that one", he howled.

The rest of the staircase was removed in stony silence, punctuated only by the ringing of the telephone.  It was the stair carpenter, calling to say the new stairs would not be ready until the following Friday.   I learned some valuable new skills that week.  They included climbing down a ladder while wearing a motorcycle helmet and carrying both a briefcase and a cat.

The new staircase, once installed, was perfectly satisfactory, but wow, was it ever straight.  And boring.  So we decided to finish it off with leopard print broadloom, a carved double-rope mahogany bannister with bronze hardware handmade by Ivaan, and the ultimate "flourish" - a pie-shaped mahogany stair leading to the living room, which would also serve as a stage for the Pyromaniac Choir - our nieces and nephews - when they felt like performing during family get-togethers. This is a photo of my Dad (the grandson of Barnett Levy) checking out our newly installed "stage" leading to the staircase we'd replaced. 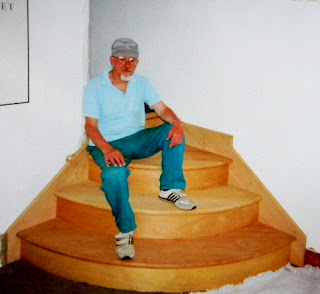