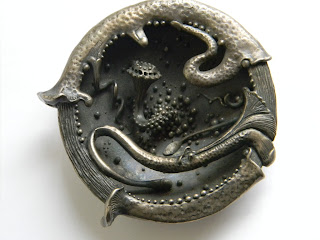 This is the Exquisite Object.  I do not know what it is.  I do not know when Ivaan made it.  I believe it is bronze, but I am too protective of the patina it has developed to confirm this.  If it's not bronze, it's silver.   Ivaan doesn't appear to have signed it - and believe me, I have looked.    If I had made something this beautiful, I would simply put down my tools and never make anything again, content to rest on my laurels for the remainder of my life on Earth.

The Exquisite Object is about four inches in diameter and is shaped like a shallow bowl.  The domed underside is completely smooth - rare for Ivaan.  At the top (under the frilly protrusions at seven and nine o'clock on the photo)  are two holes, suggesting it is meant to hang from something.  It's too beautiful simply to hang on a wall, but it's rather large to wear as a pendant.

Ivaan never mentioned The Exquisite Object to me.  I found it among his archives.  It is undeniably his own work.  There is definitely no mould of it, and I think it would be impossible to duplicate it because of its complexity.  I think I may start wearing it around my neck because it's too beautiful not to.

Not a day goes by that I don't regret being unable to ask Ivaan something.   While I often ask him things at night and wake up knowing the answer, so far I have received no explanation for the existence of The Exquisite Object.

Well, I just wanted to share this unspeakable beauty with you. Maybe one day I'll know more about it.
Posted by Eya at 4:01 PM