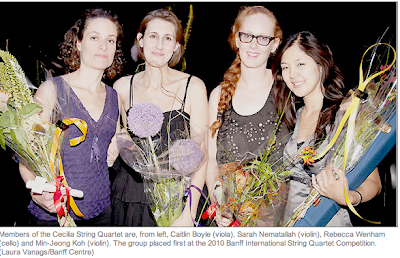 CECILIA STRING QUARTET
In early 2005, Ivaan and I went to a lunchtime concert held in the solarium of Falconer Hall, Faculty of Law, at U of T.   We were both feeling very fragile that year, and he was still coming to terms with the presence of the wheelchair in his life.  We decided that it would lift our spirits to get out and hear some music, and a series of free concerts by students in the Faculty of Music at U of T, which were to be held in odd locations around the campus, seemed like the perfect prescription.

Our first concert was a performance by the Cecilia String Quartet - well, it was three members of the original Quartet and a young male classmate of theirs, filling in on cello.  Ivaan was determined he was not going to listen to the concert sitting in his wheelchair.  He asked me to transfer him to a sofa and then hide the wheelchair, as far out of his line of vision as possible.  He was getting ready to enjoy himself, and he couldn't enjoy himself if he was the "disabled" guy in the room.  (It's funny - even on his last day on earth, "disabled" would be the last word I'd use to describe Ivaan.)

I have no recollection what they played, but the Cecilia String Quartet captured Ivaan's heart.  Their performance was so physical, and the interplay among the musicians was so riveting, it was an hour that Ivaan never forgot.  Sarah Nematallah and Liana Berube were on violin.  I think Sharon Wei played viola, and this young man with a Spanish name, who wasn't part of the Quartet at all, was on cello.  I remember I was crying during the concert, partly because their performance was so captivating, but partly because I was witnessing a profound soul-stirring taking place in Ivaan.

Liana Berube, on violin, was all arms and legs.  She was seated on a chair, but only just, because she is such a physical player that I was on pins and needles, waiting to see if she would actually fall off her chair or crash into one of the other musicians.  Liana was mesmerizing to watch, but it was Sarah Nematallah, on second violin, who was holding the reins.  Ivaan was captivated by the fact that the other Quartet members studied her breathing to know when to begin:  a quick inhale by Sarah, and they were off.

Shortly after, the Quartet won the Felix Galimir Award For Chamber Music Excellence and we attended their performance as prizewinners at Walter Hall, Faculty of Music.  When we returned home from that concert, Ivaan decided he wanted each member of the Quartet to have a piece of his jewellery.  He decided on identical dragonfly brooches, and had me deliver them to violinist Scott St. John, who was their professor at U of T.    Subsequently, when we'd go to hear them play, we'd see them wearing Ivaan's dragonflies.

The Quartet had a couple of personnel changes after Felix Galimir:  Liana went on to pursue other interests and then Sharon, who had moved from viola to violin after Liana's departure, also left.  They were replaced by Min-Jeong Koh on violin and Caitlin Boyle on viola.  Cellist Rebecca Wenham and violinist Sarah Nematallah were the original Quartet members.  (I gather the Cecilias have recently acquired a new cellist, Rachel Desoer).

As Ivaan's health declined, we'd still go to hear the Cecilias whenever we had the opportunity.  He'd ask me to send them a cheque if they were going out of town to perform somewhere special, because he wanted them to take themselves out to lunch in Paris or wherever and have a good meal, as a gift from him.  He treasured the communications and correspondence we had from them, and was extremely proud that Sarah wrote to us, offering to bring the Quartet to our condo and perform for Ivaan when they were next in Toronto.  Unfortunately, Ivaan died before this could occur.

The joy Ivaan experienced in listening to the  Cecilia String Quartet inspired my return to university to study Historical Musicology in the fall of 2005.  Sarah Nematallah generously contributed to a paper I wrote about the Mooredale Concerts in which she participated, shortly before the death of founder Kristine Bogyo.  The Cecilias don't just get up on stage and perform; one or the other of them tells the audience about the  music, what's significant about it, why they chose it, what to listen for.  It connects them to the audience, and it connects the audience to them.

I went to hear the Cecilias perform at the St. Lawrence Centre for the Performing Arts shortly after Ivaan's death.  It was very moving, being there without him.  Sarah and Becky were wearing Ivaan's dragonflies (Liana and Sharon of course kept theirs when they left the Quartet).

If you are able to attend, pay close attention, as I am sure Ivaan will be in the concert hall, waiting for Sarah to inhale - and start the performance.
Posted by Eya at 8:23 AM