THERE'S AN APP FOR THAT

A few years after Ivaan's death, I donated a very large collection of his photographs to the City of Toronto Archives.  These photos were taken primarily between 1990 and 2000, a decade during which Ivaan took out a different camera every day and shot a roll of film, often black and white,
but sometimes colour, of whatever interested him in an area of downtown centred on Queen and Bathurst Street, extending as far east as Parliament Street and as far west as Ossington Avenue.  He rarely went north of Dupont Street or south of Front Street.

Ivaan photographed the regular people who lived their lives in the public domain, often close to Queen Street.  They weren't necessarily homeless, though some of them were.  He also photographed particular genres: mother and child photos, young couples often in goth attire (see my previous post about Ryan and Corrie, as they were frequent photographic subjects), indigenous men and women who spent time at The Meeting Place, a
drop-in centre housed in a former bank at Queen and Bathurst Streets, street performers, plus non-human subjects such as manhole covers, abandoned shoes, graffiti, derelict bicycles and old-timey storefronts such as pizza shops (with the pizza painted on the shop window), barbershops, hairdressers, junk stores, rows of pay phones and the people using them, laneways, and old garage doors.

The beauty of his collection of photos, which number in my estimation about 20,000, was that he photographed the same people, the same scenes, over and over as the decade wore on.  Looking at the photos was a bit like time travel, because you began to look out for Lester Pawis, the indigenous man who was such a favourite of Ivaan's, of Lance, the young man with an impressive mohawk hairdo, and as Ivaan came to know them (because he regularly gave them copies of his photos) he learned a bit about their lives.  Often, he learned of their deaths from someone else in the neighbourhood.  He'd find out where their funeral was being held and would show up with photographic prints to give to the family.  Often there was no family.  On one occasion, the funeral of Jimmy Croxon, a Nova Scotian who played drums on some upturned buckets at the corner of Queen and Bathurst, Ivaan was the only mourner and he had no one to give his photographs to.

Patrick retired from the Archives some months ago and partnered up with a young man named Alex Jansen who had the idea of developing a web application that would enable people walking along Queen Street West to be notified via the app when they were at the location of one of Ivaan's or Patrick's photographs, and to see the photographs they had taken.   It seemed like a brilliant way of keeping Ivaan's photographs in the public eye. A Toronto-based broadcast journalist, Garvia Bailey, came on board to narrate the stories associated with the various pictures.

It seems that Lester Pawis and Jimmy Croxon and "Mr. Pins" and Lance and all of Ivaan's characters are going to have a whole new moment in the sun. Best of all, Ivaan, who never once used a mobile phone, eschewed digital photography and wouldn't have known an App if he got it in his porridge, has somehow been dragged kicking and screaming into the 21st century.

Because, as it turns out, there is an App for that. 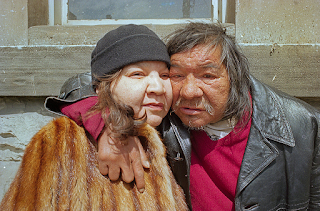