Last year, I was overcome with what I can only describe as "land hunger": the dawning realization that I owned not one square inch of land that wasn't covered by concrete or masonry.  It hadn't really bothered me for years.  I have a black thumb and the only things I had successfully grown were trees.  I've planted a catalpa, a weeping mulberry, a cherry tree and a ginkgo biloba, and as far as I know, three of those four trees are still alive.  But that's the extent of my agricultural skills.

I had a hatch installed in my kitchen ceiling to give me access to my flat roof. It was a terrific idea, because it added significantly to my living space. The first time I went out onto the roof was quite unnerving and I thought, "I'll probably never, ever do this again, unless my building catches fire and I need to escape". That feeling lasted one day. Ever since, I'm out on the roof about 20 times a day in good weather.  However, once I had access, it made good sense to re-do the roof.

Once the new roof was installed, I needed to make it legal by having a perimeter railing added.  I had it set back from the actual perimeter of the building, so I could walk around the outside of the wooden railing if I needed to.  Now that the roof was sheltered by a tall railing, I started planting like a mad woman.  I'm not so much into flowers.  I prefer vegetables, because you get the best of both worlds: some flowers and then something to eat.

My crops this year include potatoes, garlic, leeks, basil, lavender, arugula, snow peas and rhubarb.  I've since been informed that the potato is basically the cockroach of vegetables, and potatoes do not require the use of any actual brain cells in order to proliferate.  I counter this received wisdom with the response that my potatoes, at any rate, are organic cockroaches.

Last winter was unbelievably long and tedious.  I suffered so much that I nearly purchased a decommissioned church with a couple of acres of land about an hour away from Toronto.  I was only dissuaded from buying the church by my friends Neil and Carolyn, who pointed out that since I wanted to plant fruit trees on the land, I should buy land that already had fruit trees on it, and if I were doing so, I didn't strictly need a church, either.

Winter ended eventually, and I became enamoured of the idea of having a beehive on the roof.  Luckily a business called Alvéole had opened up nearby. They teach beekeeping and sell supplies.  And that's how I came to have an AirBee&Bee.  Here's Hilary from Alvéole, setting up the first level of the hive. 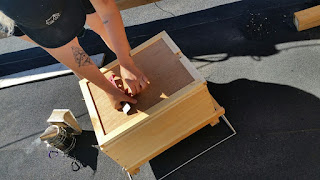 To keep honeybees calm when you're working with them, it helps to have a smoker.  It's a bellows attached to a burner unit into which you put pieces of untreated burlap.  The smoke from the burner dissipates the pheromones in the air which would otherwise cause the bees to be nervous, feeling they were under attack.  Hardcore beekeepers do not use a smoker.  I am not hardcore. 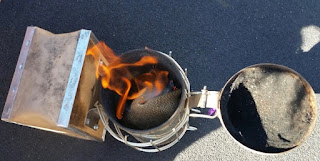 Here are a couple of photographs of my frames. 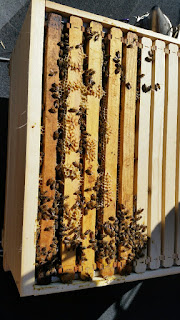 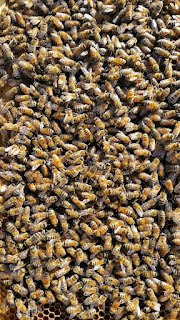 Even though it's been incredibly hot on the roof, the hive is thriving.  I now have seven frames absolutely coated with honeycomb, so we added a second storey to the hive last week. 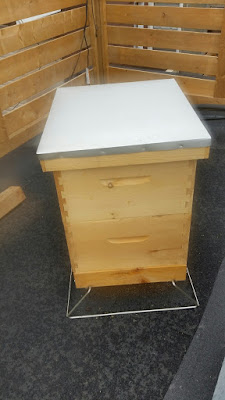 The beekeeping season does not end till October or November, so it's not impossible that I'll be able to add a third storey to the hive.  I'm starting to learn the names of beekeeping equipment.  I have a bee brush, a queen excluder, and although I don't have one of those netted hats yet or a hive tool to pry the individual frames apart, I'll no doubt be getting my own, plus my own smoker, this week.

Ivaan would have pointed out that bees were the symbol of the dei Medici family, the wealthy Renaissance patrons of the arts, and I kind of consider myself a micro-scale patron of the arts, so my bees seem extra appropriate.

I know what you really want to ask:  have I ever been stung by my bees?  No. They seem to like me, actually, and come and sit on my arm as I'm working on the hive.  But I have a calm demeanour and I'm careful not to bother them for more than ten minutes at a time.

It's hard to tell how many bees I have, but I'm guessing 50,000.  They are all named.  For ease of reference, they are all named Sam.  Except for the queen, whose name is Her Majesty.  Here's a photo of the queen.  She's the big golden one in the middle, without the black stripes. 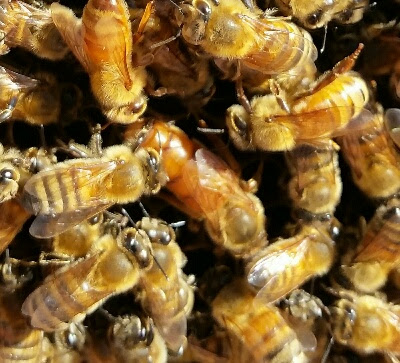 All that to say, if you've been by Atelier Ivaan lately during the afternoon and wondered why it didn't seem to be open for business, fear not. I was probably just up on the roof, communing with 50,000 Sams.