"RING" AUDIO: THE STORY OF MY VINTAGE STEREO

About a year ago, I started to miss listening to my small but excellent vinyl record collection, so I decided to invest in a fully restored vintage stereo system.  Naturally, I went to Ring Audio. I'd worked part time at Ring Audio in the mid 1970s and I liked the equipment from that era. Ring Audio is no longer in the original location, nor is it owned by the original proprietors, but the current owners were part of the Ring Audio community back in the 1970s.  Ted Syperek and his son, Nick, now run it out of a warehouse at the foot of Carlaw Avenue.

I emailed Nick (honestly, I remember when that kid was born, and he's now a married man) and told him what I wanted.  He said he'd look after it, but it might take some time.  It did. It took so long that Nick went to Korea on his honeymoon before I had my stereo.  So I exchanged a few phone calls with his dad, Ted, and one fine day Ted called to say he had an admirable system put together for me.  It was exactly what I wanted: a Dual turntable, Boston speakers and a Luxman receiver...all at a substantially discounted price. I was so excited, I rented a car and drove right out to pick it up.

Luckily, I remembered how to hook those things up.  But it didn't feel quite complete so I looked on Kijiji and found a Harmon Kardon CD player for sale that would blend in well with the system.  I now have an awesome sound system. I was so thrilled with it, I invited Ted to let me return the favour by providing a piece of jewellery, as a thank you.

So Ted and his beloved, Victoria, came over.  It's a miracle that she and I hadn't met before.  She owns a vintage clothing and accessories shop called Gadabout, and we've been at many of the same vintage clothing shows. We know quite a few people in common.  So Victoria tried various things and finally selected a pendant for herself.  It looks terrific on her.  Then she mentioned that she has quite a few good gemstones and has always wanted to have them all set in a ring.  So she looked through the inventory of Ivaan's rings and was very drawn to one in particular.  Oddly, that ring and my stereo system are the same vintage exactly.  She brought me her gemstones and I made up the ring in white gold. It ended up looking spectacular, partly because her diamonds were absolutely terrific. 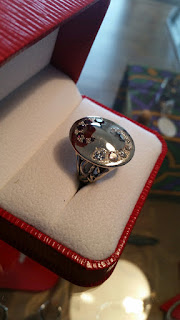 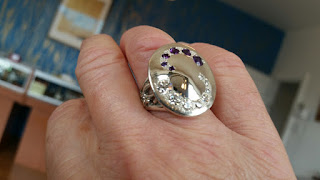 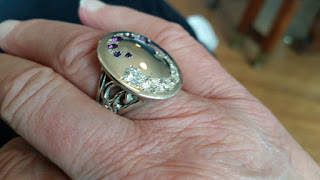 Every time I turn on my stereo, I think of Ted and Victoria and her ring, and I do a little dance of joy, because I am so lucky.