This year I decided I'd like to return to Iceland in October, to attend the annual lighting of the John Lennon "Imagine Peace" memorial on Viðey Island, very close to Reykjavik. The memorial was 10 years old, and John Lennon and Ivaan share a birthday, October 9th, so I felt this was a significant year to attend.

I've been to Iceland many times, but never this late in the season, and never twice in one year.  I'd also never been there alone, so I was looking forward to the adventure. I decided to stay in an expensive hotel instead of the bare-bones apartment I normally occupy in a very old house. Frankly, next time I'll stay in the bare-bones apartment, but that's another story!

Yoko Ono chose Iceland for the location of the Imagine Peace memorial because it is a country without an army, and because there is so little pollution that the blue light from the memorial shines straight up into the heavens. Every year, she attends for the lighting. As she's becoming frail,  and the weather was cool and rainy, this time she opted to stay at the Reykjavik Art Museum, on the mainland just across the harbour from Viðey Island, and to appear at the lighting by video link. At five-thirty p.m. on October 8th, public transportation is free of charge in Reykjavik, in honour of John Lennon's birthday.  This includes Gestúr, the ferry to Viðey Island.  Special buses took us right to the ferry docks.  We climbed aboard and headed for Viðey. 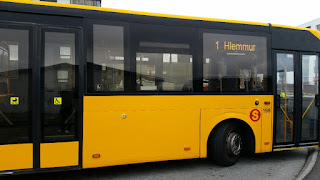 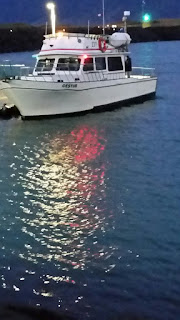 We wrote messages of peace on paper tags and hung them on the branches of trees that were collected in bunches for this purpose.

Food and hot drinks were available. We listened to music by John Lennon.  We attended the tiny Lutheran church on Viðey Island.

When nine o'clock came, we were all assembled around the Imagine Peace Memorial, a white marble cylinder bearing the inscription IMAGINE PEACE in 24 different languages.  A beautiful women's choir sang a gorgeous rendition of John Lennon's song Imagine, and you couldn't tell if we were crying or not because it had started to rain.  I had a good umbrella with me so I was protected, but  still it was very cold.

There were about a thousand people on hand from all over the world.  Babies.  Elderly people. Young people. Couples.  Families. Individuals.  We didn't all speak the same language, except the language of peace.  We all spoke that.

It was a great week for me.  The weather improved day by day, until the day I left when it was basically sunbathing weather.  Icelanders were thrilled.  Other highlights of the trip were visiting the Art Museum and Háskólann Í Reykjavík: Reykjavik University.  It is modelled on the Star Wars X Wing Fighter. 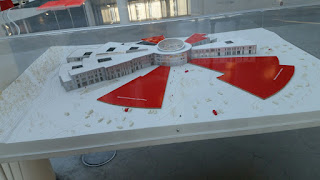 It's a small, brilliant university and I wish I'd had more time to explore it (and the geothermal beach next door). The various corridors are named after planets in our solar system: 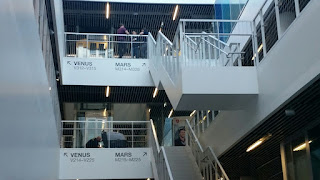 This working Formula One car is a class project by the Mechanical Engineering students. 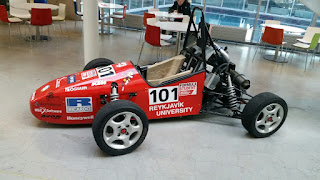 I also slept a surprising amount, ate very well, and had plenty of time to think - something you can't always do when you're playing tour guide.

Each time I visit Iceland, I come away with a few new words and expressions in Icelandic, and I am amazed how many similarities there are between Icelandic and Russian, both in grammatical structure and in actual words.  Iceland is becoming increasingly expensive.  The locals tell me they can't afford the restaurants and clothing shops frequented by tourists.  One bus driver told me that it's cheaper for him to fly to Germany and buy clothes than it is to buy them on Laugavegur, the shopping street, or at Kringlán, the little shopping mall.

My purchases were simple this time:  Icelandic liquorice as gifts for liquorice-loving friends and relatives, an Art Museum t-shirt for my Reykjavik-loving nephew, and a brand new vintage suit for myself from Rauđi Kross, the Icelandic Red Cross thrift shop. 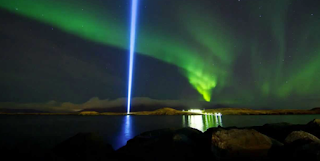 I came back feeling light and free, energized and happy.  And I felt that for one night, I had been among totally kindred souls.  I could, in fact, imagine peace.