Everyone who knew Ivaan really well knew how connected he felt to animals.   Except for dogs, whose company he never enjoyed, Ivaan loved all God's living creatures.  He was a veritable St. Francis of Assisi.

A traumatic event in his boyhood was the pivotal event in developing his compassion for insects, birds, rodents, cats and pretty much everything that moved.  His father had made him a bow and arrow.  Ivaan went out into a wooded area near their home in Cabbagetown and took aim at a little creature.  I can't even remember what it was, because whenever he recalled the incident he became so inconsolable that he could hardly speak. Suffice it to say, he wounded some small creature, but did not kill it, and he was so disgusted with himself that he broke his bow, threw it away and vowed to atone for his unkindness for the remainder of his life.

When I first met Ivaan, he had a polydactic kitten named Thumbs.  It was a very sweet little cat, a very dark grey, and he was deeply attached to it.
Here's a photo of Ivaan and Thumbs. 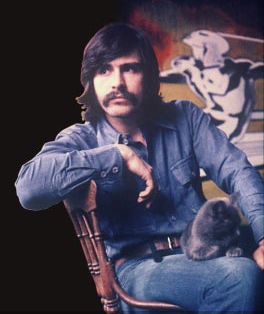 I never met  his next pet, but I heard about it frequently.  Her name was Peggy.  She was a Praying Mantis with one leg.  Ivaan, who had recently started working in metal, was worried that Peggy wouldn't thrive with just the one leg, so he carved down a toothpick, and using jeweller's wax, attached the wooden leg to the stump of Peggy's missing leg.  He must have done a good job, because Peggy went on to have a surprisingly long and active life.  Her name, Peggy, derived from the fact she had a peg leg, not because of any certainty that she (or he) was a female.

Sadly, no photos of Peggy have survived.

The longest-surviving of Ivaan's animal companions was Pinky.

We found Pinky on the garage roof in June 1991, chirping like a baby bird.  He looked to be about three months old, so we assigned him a birthday of March 31st.   Pinky wasn't a bird; he was a cat. We wouldn't have named him Pinky if we'd known he was a boy, but I had heard that Benazir Bhutto, later the first female Prime Minister of Pakistan, was nicknamed Pinky, and our cat had a little pink nose.  By the time we had lured him off the garage roof with saucers of milk and he became part of our household, we began to suspect he was a boy.  We felt it would be too traumatic for us to change his name, as he was already answering to the name Pinky, so we called him Pinky at home, but if we had to call him in from outside the house, we gave him the street name of Ned.

Here's me and Pinky, looking like we were getting our passport photo taken. 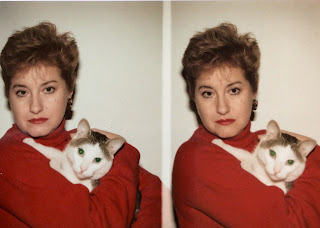 I remember when Pinky bonded with us.  A large black feral cat in the neighbourhood was bullying Pinky.  Ivaan's protective nature took over.  He borrowed a humane trap from Animal Control and set it up in the front yard, baited with a can of sardines.  In the middle of the night, we heard a yowling sound as the feral cat walked into the cage for a sardine snack, realized he was trapped and began to complain loudly.

Ivaan brought the cage inside, lay it on a thick pile of newspapers and we went to bed.  Next morning, little Pinky was luxuriating on the floor, just beyond the reach of the large black cat's claws. Pinky felt like the Big Man on Campus. He looked gloatingly at the black cat, as if to say, "I had salmon for breakfast today.  What did you have?  Oh...nothing?"  After Animal Control came and took the black cat away, Pinky was so bonded with Ivaan that nothing could keep them apart.

They had their own language.  Ivaan taught him tricks.  They were a team. When we moved into our new house, Pinky was very upset and kept on walking back to our old house, until he realized that he actually wanted to be wherever Ivaan was.

Pinky was a cat with a personality.  As he got older, he developed the persona of a bachelor uncle, and his identity was fleshed out with a surname, McBinkey, and an imaginary family back at his ancestral home in Bonehead, Sussex.  Our own nephews became the McBinkey nephews:  Oliver, Lionel, Angus and Ivor McBinkey.  Our niece Nicole became Lucy McBinkey.

The only thing Pinky was unsure about was the nephews.  If they came to visit, Pinky moved to the back yard and wouldn't come back in until they went home and we stood at the back door and said emphatically:  "Pinky! There are NO NEPHEWS!"

Pinky lived to be 14 and a half.  He died on October 13, 2005. Ivaan was so upset that he had to go out for a long drive with his friend Mike, and he didn't come back into the house until I had already conducted funeral rites for Pinky in the back yard of our house.  Pinky was the last pet Ivaan ever had.  They were really attached to each other.  Like Ivaan, Pinky had had a rough start in his early life, and they recognized a kindred spirit in each other.

As Pinky's obituary read, "RequiesCAT in Pacem".
Posted by Eya at 1:14 AM