We lived on Portland Street for most of our married life, in a three-storey house that resembled a shoebox tipped up on end.  It's right downtown, where few houses exist. We loved it there.  We had a backyard the size of a postage stamp. At night, our back yard would be lit up by flood lights illuminating the silhouettes of marauding raccoons. 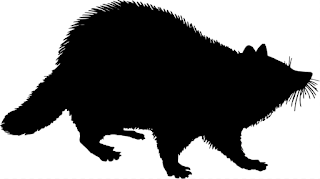 Ivaan loved raccoons, but not as much as he loved our cat, Pinky.  The raccoons were cramping Pinky's style. At one time, there was a mother and father raccoon, whom we called Fat and Skinny, and their five cubs, all inhabiting our back yard. It was them or us. Ivaan rented a humane trap, and invested in seven cans of sardines.

He had heard that if you transport raccoons across a body of water,  they won't find their way back. The Don River was five or six miles away.  Ivaan figured we could catch them one at a time, take them across the Don River by cab, release them all in the identical spot, and return for the next one, until the whole family was relocated.

We set up the metal cage in the back yard.  As soon as it got dark, Skinny showed up.  It didn't take him long to smell the sardines.  Once Skinny was in the cage, the gate snapped shut, and immediately Ivaan was ready with a large contractor garbage bag, into which he slid the cage, sardines, Skinny and all.  He called for a taxi, requesting a cab with a large, empty trunk.  The taxi arrived.  Ivaan loaded the cage into the trunk and we headed east along King Street.  When we crossed the Don River, he asked the cab driver to pull over, got  the cage out of the trunk, walked to a little wooded area and carefully unlatched the cage.

Ivaan didn't have to ask Skinny twice.  Skinny acted like he'd just robbed a bank. He got out of there so fast, he didn't even bother to finish his sardines.

Ivaan got back in the taxi, returning the cage to the trunk, and we returned home.   So far we'd spent $30 on cab fare.

We set up the cage again with a fresh can of sardines.  Within half an hour, Fat came by with a nonchalant air. She looked like she was just checking out a new pop-up restaurant.  She barely fit in the cage, but free sardines?  She wasn't going to pass those up.

Things worked exactly as they had before.  We called another cab, headed east on King, stopped in the same spot, and honestly, it wasn't that easy to get Fat to back out of the cage.  Ivaan had to tip it up on end, so she and her sardine dinner were ignominiously dumped by the wooded area.  He got back in the cab and we went home, forking out another $30 to the taxi driver.

On round three, we caught one of the cubs, called a cab, went to the wooded area and released the cub.  Ivaan was starting to do the math.  If we relocated the entire family by taxi, we were going to have to spend over $200.  And we were getting funny looks from the taxi drivers.  So Ivaan persuaded me that our return trip, with the empty cage, should be by TTC.  "After all", he said, "the streetcar stops right at Portland Street."  So we paid the taxi driver $15, went to the streetcar stop and waited.  Just before we boarded the 504 streetcar, Ivaan handed me the contractor bag containing the cage.

Now that I was actually holding it, I realized the whole apparatus smelled strongly of angry raccoon mixed with sardine.  Ivaan got on the streetcar first and paid our fares.  I clambered up behind him with the cage, but Ivaan was already half way down the streetcar.  As I came close to him, he arched his eyebrows, looked disdainfully at me and the cage, and said to a passenger seated nearby:  "Some people!"

It was a rather quiet ride back to Portland Street.  Once we were home again, Ivaan set up the cage for a fourth time, caught another cub, called a taxi, loaded the cage into the trunk and climbed in the back seat.  Instead of getting in after him, I just leaned in the door, said to the driver, "Some people!",  closed the car door smartly and went back into the house.

By the time we'd run out of sardines and returned the rented cage and tallied up our transportation costs, we'd spent nearly three hundred dollars.  Fat, Skinny and the kids got a waterfront property, and Pinky got his yard back. It was a memorable, if expensive, evening. But we like to think it was worth it, and we know Pinky felt the same.